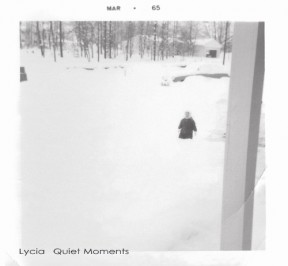 Sam: The new Lycia album, Quiet Moments is out this week. I read that it’s been 12 years since LYCIA had a new album out? Is that accurate? What made you decide to record a new album?

Mike: Well, we had the Fifth Sun digital EP out in 2010, but in regards to a fully realized full length that goes back to 2002 and Tripping Back Into The Broken Days, so that would be 11 years. But even that is a little fuzzy because right up to the pressing time we had planned to used the Estraya name as opposed to Lycia. I sort of see Quiet Moments as picking up from where Estrella left-off back in 1998. As always with me and Lycia, everything is a bit blurry and even questions that would seem to have clear answers don’t. Even though Lycia was pretty low profile throughout the 2000s I was always messing around in the studio. After helping Tara with a solo show back in 2008 it sort of lit the fire again, and that led to us working on Fifth Sun. After that I immediately began working on Quiet Moments, which also involved me finishing some songs that were started back in the mid 2000s.

Sam: The return of LYCIA began when Handmade Birds released a Vinyl edition of your 1996 album Cold. What were your thoughts on Cold, hearing it all these years later?

Mike: Cold was Lycia’s high point in my opinion. Everything fell right into place at the right time. To me it’s a special release. Listening to it again during the preparation for the Cold LP brought back a lot of memories from those initial Ohio years. Which was good and bad at the same time. Those days were Lycia’s best so it’s nice to remember, but sad that they are so far away.

Sam: Is there anything you miss about the 90s, and all the road-work Lycia did?

Mike: I miss the way 1995 was. We were pushing forward and so many things happened. The ’95 tours were filled with such hope and excitement. Later tours I felt a bit jaded.

Sam: A lot of past LYCIA albums has a mood of nostalgia, loss, sadness, & hope. Is that still in your lyrics?

Mike: It is still very present and still very important. In fact that description would be a perfect one for Quiet Moments. If I had to describe each individual song on Quiet Moments with one word, I could use the four you just stated, and have an answer for each song. I would say that Quiet Moments is the most nostalgic release I’ve ever done. It is the most personal by far.

Sam: How are you a different person than back in the late 80s, when you were mailing me the “dreaded white cassettes” with LYCIA demos on them?

Mike: A good yet very hard question. I’d like to think that my musical vision is the same. I think it is, but obviously the way that I make music now is light years away from the way that John and I worked back then. Despite the different tools I think the end result creates a very similar mood though. I see it that way. Lifestyle though I’m a million miles away. So is my perception of things around me. But who wouldn’t be? That was 25 years ago. Oh, the dreaded white cassettes. What an idiot I was using those horrible cheap tapes. If I would have used quality cassettes back then there would at least be a chance for me to restore hours of never released music. But that will never happen.

Sam: Final question. You said Quiet Moments is sort of like a follow-up to Estrella. How do you think old-school fans will like this album?

Mike: In terms of the Lycia timeline and how it feels to me, I see Quiet Moments as a continuation of our 90s work. Estrella was the last in that line. But really I see Quiet Moments as a follow-up, in regards to mood and style, to A Day In The Stark Corner. They are the two most personal releases for me. They both have ambient and noise experimenting. In both cases I layered sound beyond what I thought I initially could. I see them a sister releases. I didn’t go into the recording with this in mind, though I did want to reconnect with the slow motion atmospheric side of Lycia’s sound again. I’m thinking that the old school people, the ones that were into Ionia and A Day In The Stark Corner, will like Quiet Moments. Well, I’m hoping they like it. For years I’ve received e-mails (and before that letters) asking for a return to that style. Well here it is. 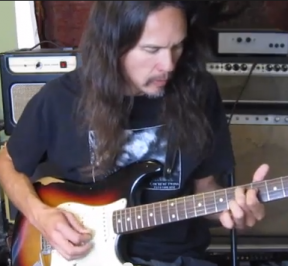 For a dormant band, there’s strangely 3 Love Spirals Downwards news items for everyone:

1st, I remade the Ardor instrumental “Mirrors a Still Sky,” a new re-recording that I did in the studio this year. It’s on the Love Spirals Downwards youTube channel. I guess for that matter, the fact the we have a youTube channel may be news in itself

2nd, Also on our youTube channel, I made a video of myself playing “Avincenna” (also from Ardor).

And 3rd, You probably heard about Suzanne performing some Love Spirals Downwards songs in Portland on August 17th at Brickbat Mansion. Facebook page.

And thanks for the new Steve Roach CD; always a pleasure to get something new from Steve. Ryan