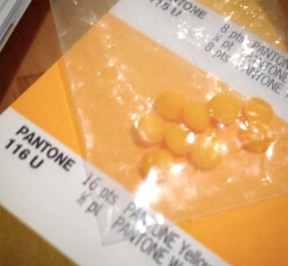 Hi! The first bit of GREAT news is that I turned the label + jacket art into Cascade. I heard back from Amber, the cover model, and she’s cool with my processing on her image. Nice! Approval.

Before sending the art in, there was the matter of matching the vinyl color. Ok, I know I will never perfectly match the color between the print and the vinyl. There are always fluctuations in printing, plus the vinyl is swirled so it’s not one exact color. I went nuts for about 5 days because I cannot locate my PMS books. These “Pantone Books” contain pages with all the pantone colors; it is the best way to match color, as what I see on my monitor isn’t exactly the color that things will print. I thought the books were right here on the shelf behind me, but nope! Cannot find them. My friend Howard from Spotted Peccary Records has a set of new books (mine were / are from 1990) and I dropped by to find the color.

PMS 116u, for those of you checking at home

I then went into Photoshop, opened the cover files, and drew a line in PMS 116u, to see how closely it matched the color that I eyeballed…

My eyeballing was pretty close!

Strangely, the front cover looks more greenish than the back cover. Howevere when you lay the two on top of each other, and add the yellow lines, they seem to be pretty close:

I think it’s the orangish spokes that are tricking my eye into thinking the back cover is more redish. Seriously. This is the kind of stuff us graphic designers think about! : )

This is the disc label art

Josh says that he plans to cut the lacquers in the next few days, or before the end of next week for sure. It would be nice to have everything turned in before I leave town for the holidays.

In:Black Tape For A Blue Girl 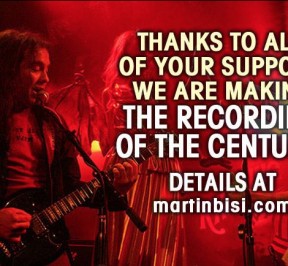 A piece of Kickstarter advice. Final graphic for your page.

Doing a Kickstarter? Here’s my #1 piece of advice for your last 3 hours.

Once your campaign ends, the main page is locked down and you cannot make any changes. Your Kickstarter page will be up for ETERNITY; consider what you want people to do in 6 months when they drop by the page. I add a graphic to the top of my page with a link to a website; I want to provide an easy way for people to find more info about the THING that I spent all that time Kickstartering.

Don’t make them dig three clicks in to find the link!

Here’s one I created for my friend…. 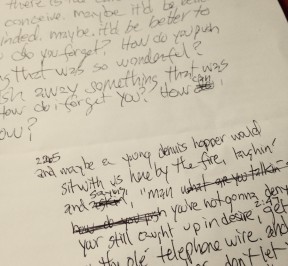 How did Dennis Hopper get into the lyrics of “The Cabin?”

Black Tape For A Blue Girl: The “Bike Shop” EP

A few days ago on a post at the Black Tape For A Blue Girl Patreon, I replied: In “Absolute zero” he knows its hopeless and yet he’s still hopeful. In “Cabin” he’s resigned. In “Vega” he’s resigned. And in “She’s Gone” he’s sort of reached the point of, “Oh fuck it! I’m just going to move on and try again…”

Kervin Brungardt commented: I heartily approve of the story arc and stages in attitude in Bike Shop. It happens that way so often and you have captured the emotional landscape so well. Trivia – Dennis Hopper grew up in Dodge City, KS 80 miles 18 years from where I grew up. Always proud of a fellow High Plains person.

And here’s my reply.

Hey Kervin… Dennis is is a home town boy. How cool! Here’s how the idea came to me to include him in the song.

Usually I spend time listening to the music track as I craft words into lyrics. But “The Cabin” and “Vega” were written a bit differently. I had the music recorded, and I wrote some words (first half of photo above) that I thought fit the mood. Nothing polished, just source material for the song. I brought that sheet into the studio and began recording guide melodies over the music. Shaping them into lines that fit the lengths of the lines.

That was verse one. Now what? When I look at that sheet of paper, I see I thought, “What happens next? Oh! Why doesn’t Dennis Hopper show up to give Mike’s character some dating advice!”

But why Dennis Hopper?

I was listening to a lot of early Neil Young when writing the tracks for Bike Shop. In “Pocahontas” (from Rust Never Sleeps – 1979 – actually not so early of an album) Neil sings, “And maybe Marlon Brando will be there by the fire; We’ll sit and talk of Hollywood and the good things there for hire.” That line has been in my mind for over 35 years…. so heading into the 2nd verse, I blurted out (as you can see above), “and maybe a young dennis hopper would sit with us here by the fire, laughing and saying, “man, what are you talking about…” (if you’ve ever seen a Hopper interview on Letterman, you know how he loved to laugh and say “man”) and then I continued, “you’re not gonna deny her, your still caught up i desire…” I just started writing out a string of sentences that rhymed with “fire” to get to the joke at the end of the verse.

Later, I reread the words to “Pocahontas” and made a small change to the first line to make it more similar…

and maybe a young dennis hopper, would be there by the fire, sayin’, “man you can’t deny her, you’re still caught up in desire, get her on that ole’ telephone wire, and do what it takes. don’t let your love expire, you’ve gotta go out on the high wire, let your passion burn like fire.” It’s a bunch of somewhat cliche advice that you might hear from a friend, as you’re thinking, “Naw. Nope. Not gonna happen. Way too late.”

Thus the song ends with:

dennis loved to speak in words that rhymed, but i can’t see that they apply to me so i don’t think i’ll go back to that cabin anymore.

And yes, there is a cabin. And I’ve since visited again. I dusted myself off and tried again. 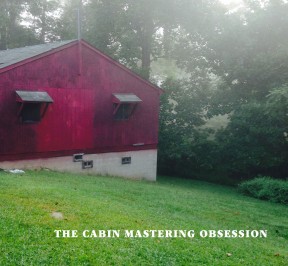 Mastering the Bike Shop (Black tape for a blue girl)

Have I ever mention to you that artists are a crazy lot? We can get obsessed over a trivial detail which – quite frankly – nobody in the world will ever even notice. And if they did hear it, they wouldn’t call it a “problem.”

Two weeks ago, Josh mastered the four tracks for the “Bike Shop” vinyl ep. They sound great; very “live” and present. However, the first verse of “The Cabin” seemed too loud to me, and not compressed well. This wasn’t Josh’s fault, it happened in my mix, and then was accentuated by the EQ and compression in the mastering. Gotta fix it!

I sent Josh a new mix of the track, to compensate. Guess what!?! On the version 2 mastering the vocals in the first verse sound very consistent (as far as the volume from word to word), but they all sounds a bit too soft.

Yeah, right! Probably half a Db too soft. Anyone going to notice?

Now I am going to try Josh’s patience by suggesting an EQ fix to the problem.

I found a model that I think would look great on the cover. I’ve sent her a message, but no answer yet. I made a mock-up of the cover, but I have to hear back from her before I can share it.

Things are moving along…