Busy weekend of working on Blacktape

This weekend it’s all Black tape for a blue girl over here!

I’ve been designing the digipak + booklet for These fleeting moments. I’m working with the photos I shot this week of Mercy in the bass, the band photos, and the lyrics. It is a process of realizing the ideas that have been drifting around in my thoughts for the last couple of months. Trying design ideas out, keeping them, or rejecting them. Improving, improving…

While I work at my computer, I’m listening to the most recent (and almost) final master of the album. It sounds great! Mastering is the final process of bringing the album together sonically. Howard takes my mixes, and adds compression, eq, and other stuff that tightens everything up and pulls the tracks together. The songs are diverse, with different instrumentation, and different vocalists. Now it’s sounding like one session, one band.

I dropped by Stereotypes and listened on very expensive speakers, plus on the three sets of speakers here in my house. We’re almost finished with the mastering!

In this process, I’ve learned about what I like to hear in my music, as far as what colors are important to me. This is a good lesson for working on the next album. Because yes, I’m already thinking about starting the next Blacktape album!

I had to reject the booklet on Remnants of a deeper purity (30th anniversary edition) because the printing was off (seems like not enough black, but the rep at the plant says it was too much yellow and cyan). Either way, argghhhh! They have to throw those 1000 in the trash and reprint; at least they’re paying for it, as they are the ones who messed up. Why don’t they proof things, before they go through the whole process of cutting, stapling, shipping? Oh, for the days of tight quality control. I don’t know if I mentioned I had to throw away the first run of stickers, because they were badly printed (by a different plant). Ugh! The booklet reprint is delaying the album a bit.

But it’s got to be done right! Especially since my patrons at Patreon are helping me pay for it!

I’ve received the vinyl on the BIKE SHOP ep, at long last! If you’re one of the Kickstarter backers, or if you’re curious, check this post. If you want to pre-order a copy, order here at the Projekt website. Do keep in mind that when I launch the Kickstarter for These fleeting moments, BIKE SHOP will be included in the vinyl tier.

As I sit here at the computer for hours, I’m spinning around ideas about what could be in that Kickstarter. If there’s anything Blacktape that you think would be an interesting reward, please suggest it on the Patreon page.

Have a great rest of your weekend, Sam 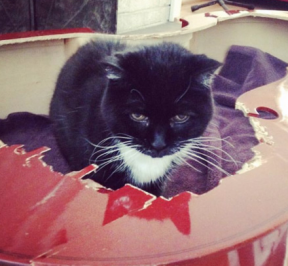 Image below might be Not Safe For Work, depending on where you work…

This morning, I tried a few more tests of Mercy in the bass (for the cover of These fleeting moments). I’ve been doing tests along the way (as I modify the bass) because I want to be really ready for the shoot. I work without a crew and I find I often miss things on set. I do a good job technically (focus, lighting, angles), but find that leads me to under-focus on the form of the body: arranging the shot. That’s why we’re practicing now, so I will be less worried about the bass, and more aware of the overall.

Even though Mercy (quite proudly) fits inside, This weekend I plan to cut the bass at the bottom to give her a few more inches of room.

I’ve never worked with an object on a cover (I did, years ago in college, on videos). So this has been a pretty fun experience.

Also, Harley wanted in on the act. Naturally. Cats! : ) 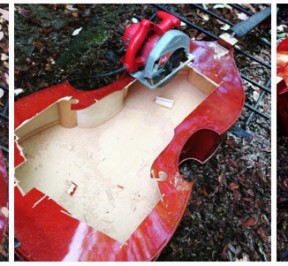 Black Tape For A Blue Girl, April (with photos)

On Tuesday, I sent the mixes of These fleeting moments to Howard, my mastering guy. That followed a weekend of driving myself a bit batty, finding small changes that seemed urgently necessary (“Is the first half of that word a db too loud? Could the drums go up .3 db in the instrumental section?”) It’s the sort of obsessive stuff that loops in my brain right at the end of the mix. But you know what? The album sounds amazing! So much good stuff, I cannot wait for the world to hear it.

I just came in from the yard, and dusted myself off after making the first “modification” to the bass. I cut it open; next I will check if Mercy fits inside as is. I think I will need to do some work to make it wider, but maybe she’s petite enough?

As I was setting up the scraps for the third photo, I got a great idea for the top premium on the Kickstarter for the Deluxe CD. I’ll make a few Joseph Cornell Box-like boxes using pieces of the bass, outtake photographs, and other bits that fit the mood. That will be a fun thing to make for a few lucky backers!

Two weeks ago, I drove 600 miles into California to record with Mark Seelig. As mentioned to my Patreon patrons recently, Mark plays bansuri flutes on the Fleeting track “Meditations on the Skeleton.” R. Scot Johns commented, “I really like Mark’s flute, but would much prefer the track with no vocal…” Your wish is my command! The backstory on this track is a bit long, you can read the full blog at Patreon. The short version is that I am going to create a bonus album, an extended version of this track as an ambient/electronic journey. I will go into the studio to work with the tracks I recorded with Mark. Process, edit, texturize. My next studio project… Soon.

You might remember the Bike Shop vinyl EP that I Kickstarted back in September. Guess what! It’s almost finished. The plant says the vinyl will be pressed mid-April. OMG, vinyl takes forever! Sorry about this, but it’s been in slow-motion at the plant for a while. I’m ready to ship them, as soon as I have them in hand.

After I get These fleeting moments designed, I am going to launch the Kickstarter for the deluxe CD edition. I have interesting design ideas for the release, ideas are still spinning & forming in my head. Stay tuned for details. I hope you will support this release. It’s the first Black tape for a blue girl album in seven years, and it’s a great one! I am thrilled with Oscar Herrera’s return to the band. He says this is the best Blacktape album yet! I love hearing his voice in the music again; it was great creating these songs for him to sing! The album met my intention of sounding like it was born from the same place as the classic 90s Blacktape albums.

There’s a blog here from January, with links to videos of the band in the studio.

It’s going to be a busy two months, there is a lot for a Black Tape For A Blue Girl fan to look forward to! Thank you so much for your interest in my work, and your support.

1 At the very top is a close up of Mark Seelig’s flutes. Starting below that on the left and then working clockwise…

3 I dropped by Cascade and picked up some samples of the 12″ cover and insert for Bike Shop. Ooooooh, they look nice. Amber Shine on the cover is just about life size. You can’t do that on a CD! Read a short blog about it (with larger photo) on the Kickstarter Update page. Michael Plaster has signed copies of the cover, and mailed them to me for my signature (these are for the backers, but there will be some leftovers for sale on the Projekt site, after all the backer packages have been mailed.)

4 Paulo in Portugal purchased a copy of the Remnants of a deeper purity vinyl release. I prepared it, signed it, and shipped it off to him. There are still around 50 copies left. If you would like a signed copy for yourself, be sure to tell Joe when you order, and also message me.

5 I designed a 4″ Projekt beer coaster. It’s at the printer.

6 I sent in the 20th anniversary CD edition of Remnants. Yes, really. It’s 20 years this summer! Wow. It will be a 6-panel digipak with 2-CDs (digi design shown here), with a deluxe 16-page booklet, and also a 1-color sticker (see that image on Facebook). This package is super deluxe thanks to the backing I receive at Patreon.

Thanks for your interest, and taking the time to read this.

Stay tune for the Fleeting deluxe CD Kickstarter, launching in May.