Hi. If you’re a fan of Black Tape For A Blue Girl and want to support me in the creation of my art, please become a patron at my Patreon page. 90 fans – just like you – are contributing; I really appreciate that! Their support helps me create; contact with people who want me to make more music is inspiring me to get up from my desk at Projekt, and work on new material.

For the last month, I’ve been keeping track of how much Projekt-work I do; I’m color coding it on a schedule. I keep Projekt separate from music. By seeing where I spend my time, my goal is that I will spend more time in the places I chose (art!)

Last week I met UK-based patron Antony for coffee. Antony is a graphic artist / videogame maker who visited Portland for a few days. We had a great conversation about music, art, creation, sponsorship, staying true to your inspiration and more. It is nice to put a face to the name of one of the very cool people supporting me!

Making BlackTape’s music is a lengthy process: the initial creation of my instrumental tracks, adding other musicians, thinking up melodies and lyrics, working with my vocalists. It’s not a one-day process! Making darkAmbient and electronic instrumentals is a good way to warm up. Unexpectedly, I recorded an entire new album from As Lonely As Dave Bowman! 73 minutes of music, with a 37 minute companion release. I will be talking more about this soon – I have some creative ideas for how to make the album available to you.

I’m also planning to make old-school-fan Randy LeMasters’ Ashes in the brittle air dream a reality; I’m going to have my guy in Canada bake/transfer the 1989 2-track master of the alternate version of the album. This was the shelved first version, which contains a number of different tracks from what was eventually released on CD. Getting that master transferred at High Res Archival Quality will cost $340 plus shipping. It is thanks to the support of my Patreon fans that I’m inspired to do this.

If you can fund a little something per month, that would be great:

In the next day, Shea will email Bandcamp download codes to the $5+ a month supporters. Check your email for that. 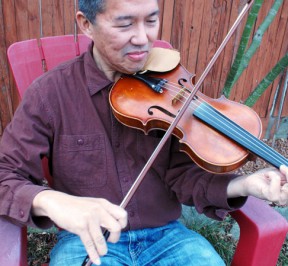 The Endangered Album, a guest post by Forrest Fang

Forrest Fang’s new album, Letters to the Farthest Star is out now on Projekt.

In the recent brave new world of “all you can stream” and on-the-fly playlists, it can be easy to forget that at one time the album as concept ruled supreme. At least that was my experience growing up during the heyday of progressive rock in the 70s and even during the DIY-indie days of the 80s. It wouldn’t occur to me not to play Yes’ Close To The Edge or Pink Floyd’s Dark Side of the Moon from beginning to end, with a break in between to change side one to side two. At the same time I was listening to the music and admiring the cover art, I could read the liner notes to tell me not only who played what, but also when and where the album was recorded, with occasional shout-out to influences, family and friends. Listening was a very personal experience you could share with your friends. You might buy the latest King Crimson while your friend bought the latest Gentle Giant and have an album listening party with like-minded music fans at your school or your dorm.

In the 80s, I would continue this practice of listening to albums like REM’s Murmur, Husker Du’s Zen Arcade or Lou Reed’s New York all the way through. Today, listeners are not only split between the physical and digital format for music, but also are lured by the option of not paying anything at all or a nominal amount per album to stream it. I think that divorcing the music from its visual form has already had the unfortunate effect of fragmenting the overall experience to the point of lessening the listener’s personal connection to the artist. Turning the album into an a la carte streamable playlist of individual tracks takes this fragmentation one step further.

I’ve always to tried to create each of my albums as a whole, so that each piece becomes a part of a continuous story or dialogue. With diminishing sales of physical CDs (let’s face it, ambient just doesn’t cut it on LP, because the music is too long and too quiet), the album format in our genre appears to be in danger of disappearing into the 21st-Century equivalent of radio. It will make it increasingly difficult for artists like me to continue offering music in a physical form, which would be a shame. If you value the album format, please do what you can help keep it afloat. Thanks, Forrest

Sam commented: The one thing that I can say in reference to our fans is that Projekt albums are regularly downloaded in total. The Projekt bandcamp page is only full-album, and sales at iTunes is around 60% full-album (vs ala carte tracks). So there’s that to keep in mind.

Forrest replied: Hi Sam, That’s good to hear. But I’m also thinking of services like Amazon Prime that allow you both stream whole albums and make make playlists of individual tracks for very little per album. I could see how it would be tempting to a casual listener to stop buying albums altogether in favor of streaming. But, of course, labels and artists would get almost nothing for this, and it turns music into a loss leader for something else — much like the way Best Buy used to sell its CDs ultra cheap as a way to entice customers into its stores. We simply become fish bait for something else which actually makes the retailer money. At its heart I think it becomes an ethical issue.

Sam commented: Yes, you know have faced the same realization I have. All these services make it way to easy to NOT buy music…. because they want to sell their subscription. They don’t care what it does to us, as the “fish bait.” It’s nice to see we still have some loyal fans who support the full album. The creative piece of art. 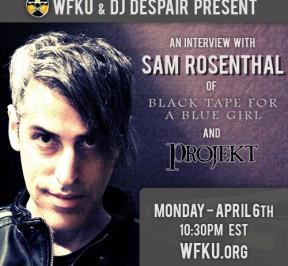 “Dj Despair brings us an interview with Sam Rosenthal of Black Tape For a Blue Girl. This amazingly talented musician speaks with us about the band, his record label Projekt, and the Patreon campaign to support passionate and introspective music. Don’t miss our special program on The Pit of Despair, only at WFKU.org!:

In:Artists, Black Tape For A Blue Girl, Inside Projekt 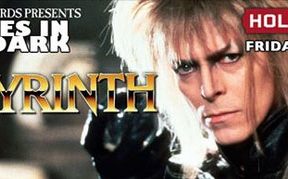 LABYRINTH, Friday May 1 – Movies in the Dark

I’m having a great time with the Movies in the Dark series! It is wonderful how many people come out to check out the goth-appropriate films. I was thinking that after the darkness of last month’s THE CROW, it would be nice to go with something lighter and more sing-a-long-y! : )

Join me and other like-minded music/film lovers for the Friday May 1st showing of David Bowie’s Labyrinth. As always, Movies In The Dark is hosted at the beautiful & historic Hollywood Theatre.

There will be a gift bag for the first 50 attendees & a raffle.

See you in the Labyrinth!

PS: to get an email when new movies are announced sign up to the Movies In The Dark email list: http://ow.ly/JHpue

In:Blog from Sam, Live, Movies in the dark 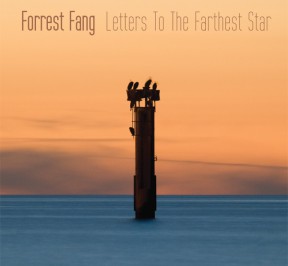 One of the premiums for $10+ patrons at Black Tape For A Blue Girl Patreon Campaign* is a once-a-month one-hour Q&A live video chat. It will be exclusive for the small group of participants who have contributed $10 or more to support me and my music.

I’ve been comparing the different sites that offer this service and (I think I) settled on Livestream as the most economical ($49 a month!) and easiest to use.< Last night, I invited people on Facebook to check out a test stream. There were a few folks dropping in and out giving it a look, and three or four who stayed on for the whole hour. It was fun to interact directly with people who enjoy the music of Projekt... I think this could be a cool new way to stay in touch. Attendees post questions in the chat and I answer them live. Is this something you'd be interested in participating in? Leave a message below. Last night on the test, Jesse asked about new Projekt releases... Today is the street date for Forrest Fang's latest album, Letters to the Farthest Star. It is extremely limited to 300 copies; when these sell out there will not be a second physical edition. If you want a copy, order today from Projekt. Here are the links:

* Patreon is a crowdfunding site built for “empowering a new generation of creators to make a living from their passion and hard work.” patreon.com/blacktapeforabluegirl