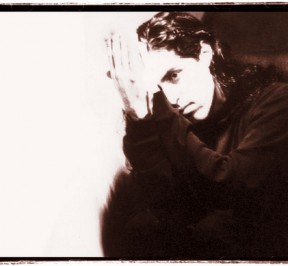 This page has not been updated in 1/2 a decade. We’ll get to it someday, promise!

Begun by Sam Rosenthal in 1983 as a way to release his own solo electronic music, Projekt Records spent its early life as a cassette-only label with a series of long out-of-print titles. Having previously published an underground music fanzine (Alternative Rhythms) in his native South-Florida, Rosenthal operated Projekt as a hobby while working at a local record store to support his music addiction.

Moving to Los Angeles in 1986 to attend college, Rosenthal found himself making warmer, more introspectively personal music incorporating vocals for the first time. The result was the first album under the name black tape for a blue girl, the rope, released on vinyl.

In 1989, Projekt released its first compact disc, black tape for a blue girl‘s ashes in the brittle air. Though Projekt had begun as a way to release his own art, Rosenthal began to see his label taking shape as a vehicle for exposing other artists whose passionate work impressed him. His first “discovery” was the band Lycia, signed to Projekt that year. Soon thereafter, Rosenthal was impressed with another young band, Love Spirals Downwards, whose debut release followed.

With several releases now in the CD format, Projekt found their listenership growing in America and Europe. Relying on self distribution to stores as well as their own mail-order sales, the label’s vision remained true: to release music deserving of attention with mindful care given to the aesthetic of the end result. Projekt went on to find other bands that shared their artist sense, signing discoveries Soul Whirling Somewhere, Lovesliescrushing, Thanatos in the early 90s and Arcanta, Voltaire, Peter Ulrich in the late 90s. Other artists who had established careers on other American and European labels rounded out the roster, including Steve Roach, Vidna Obmana, Attrition, Human Drama, Ordo Equitum Solis, O Yuki Conjugate and Alio Die.

In 1993, Sam began Projekt: Darkwave, a mail-order company that carried the music of Projekt as well as labels with a similar outlook, including Santa Barbara’s Tess Records, Germany’s Hyperium Records and Sweden’s Cold Meat Industry. Thousands upon thousands of printed catalogs were mailed out to fans, and a lot of great music was made available in the U.S. for the first time.

Projekt soon gained a reputation for being a label that put out music that was as good to listen to as it was to look at. The label’s album graphics, often designed by Rosenthal himself, have established a look that bespeaks the ethereal nature of the music.

Moving to Chicago in 1996, Rosenthal’s label grew in both number of releases and number of employees. Now with full-time marketing, distribution and promotion managers, Projekt became better able to meet the challenge of making people aware of the label. In 1996 Projekt celebrated their success by staging a two-day Projekt Festival at the historic Vic Theatre in Chicago. Fans from all over North America and as far away as Taiwan and England traveled to take part in the historic event. Subsequent festivals were held in 1997 and 1998, with the festival concept expanded to include Philadelphia, New York and Los Angeles.

While nurturing the growth of Projekt’s select roster of artists, the company also took on the task of establishing a sub-label devoted to reissues of albums important in the history of darkwave music. Projekt: Archive has become the home to reissues by Amber Route, Area, Attrition, Controlled Bleeding, Jeff Greinke, Judgement of Paris, Shinjuku Thief, Slap, The Sleep of Reason and Vidna Obmana.

After many years of struggling with self-distribution, Projekt secured exclusive distribution in The US with ADA (The Alternative Distribution Alliance) in 1997. This union allowed Projekt to achieve a new level of visibility in the marketplace. In 1999 Projekt entered into a new agreement with Ryko Distribution (with fulfillment by WEA); this new “major label” distribution makes Projekt releases available in virtually every record store in America.

In late 1999, Sam up and moved to NYC. This is somewhere he was always heading, and it is – in a way – a fresh start for the label. As Projekt enters the new millenium, there are new faces joining the Projekt roster, adding to the label’s trademark sound while also helping to redefine the genres Projekt is known for. Look for new signees Mira, Audra, Unto Ashes, Frolic and Forrest Fang as they join the establish acts to open the door to the new century for Projekt.

(very brief update from Sam) It is now 2006, and Projekt is based in Brooklyn. We’re still around, releasing great music and keeping our heads above water in the turbulent world of “the music business.” As has always been the case, Projekt has a small roster of brilliant bands that we love. We release specialized music for our loyal fans, keeping in touch via our email list + mail-order catalogs.

We’re glad your interested in our music…. and I apologize for how out of date this page is! ; ). Stay Well.

Photo of Sam by Lisa Feuer.