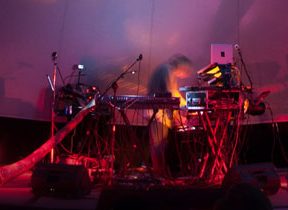 Steve Roach is a leading pioneer in the evolution of ambient/electronic music, shaping it into what it is today. An extremely prolific composer with a discography of over 100 albums since his 1982 debut, his landmark recordings include Structures from Silence and Dreamtime Return. Tireless in his creative focus, Steve has released seven albums in 2015 (so far) including the analog sequencer tour-de-force Skeleton Keys and the ultra reflective Etheric Imprints.

Steve’s artistic path is filled with new discoveries, both nuanced and dramatic. He brings to the table years of dedication and experience exploring sound via hands-on synthesis. With the sense of an artist working in three dimensional space, Steve’s skill set creates albums that breathe power, passion and vital life energy.

The most recent release – Etheric Imprints – contains mesmerizing soundworlds from the sensual realms of electronic/ambient sonic creation; it’s a plunge into the deep end of introspective music. On analog synth masterwork Skeleton Keys, Steve connects to the European EM masters at the roots of his electronic heritage while simultaneously mapping the soundworld of today’s contemporary technology-based music. The result is warm and engaging retro-futurism, a continuing evolution upon the musical structures Steve has unlocked in the restless pursuit of his soundquest.

“To fully enjoy Steve’s music the listener must be curious – not just with how it was made, or by whom, but with what happens when we allow ourselves to momentarily disappear into it.” – Chuck Van Zyl, The Gatherings

In concert, Steve creates transcendent electronic music emerging from an elemental instinctual mode. These events bring together an audience from around the country and as far away as Europe, all looking to experience the on-the-edge experience that erupts in the live setting. This make Steve’s concerts an entirely different experience from the recorded medium. With months of preparation absorbed into his system, evocative soundscapes blend with ecstatic rhythmic sections born from hands-on analog sound creation and sonic shapeshifting. The result is a direct transference of creative energy from the artist through his instruments out to the listener.

Live performances are the place where Steve’s music thrives, created at the leading edge of now.

A video profile created by Chuck Van Zyl of the Gatherings:

Steve Roach live in concert with opener Jeffrey Koepper on Saturday, September 12, 2015 at 8:00PM (doors open at 7:30PM). In the church sanctuary of St. Mary’s Hamilton Village at 3916 Locust Walk (just east of 40th & Locust) on the Penn campus in West Philadelphia. Limited admission! $30 cash at the door night of show. $10 for full-time students with proper ID (limited availability at the door). Advance tickets through Ticketweb. The Gatherings website.

This Philadelphia show coincides with the release of Steve’s limited 4-CD set, Bloodmoon Rising. An atmospheric release with four ‘nights’ created for the Bloodmoon Tetrad that concludes September 28.

Steve Roach is a pioneer in the evolution of ambient/electronic music, shaping it into what it is today. The extremely prolific American artist has a discography of over 125 albums. Following his 1982 debut, landmark recordings include Structures from Silence, Dreamtime Return and 2017’s Grammy-nominated Spiral Revelation. Tireless in his creative focus, Roach constantly challenges boundaries in work ranging in style from rhythmic analog sequencer music, pure floating spaces, primordial tribal-ambient and long-form drift ambient. He brings to the table years of dedication and experience exploring sound via hands-on synthesis. With the sense of an artist working in three dimensional space, Steve creates albums that breathe power, passion and vital life energy. 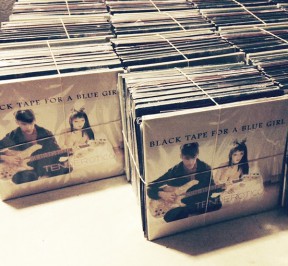 This is the same box we listed in April. If you purchased one back then, you will get the exact same CDs if you buy this one.

This is a 20-pack of Projekt CDs — $45 in the USA (includes Media Mail postage). Outside the USA, postage is additional. The barcodes are struck, some are without jewel boxes. The majority of the releases are Goth/Darkwave, though there are a few electronic/ambient titles, too.

The contents of each box is the same (give or take a CD). If you order more than one, you will have two copies of nearly every album. It is statistically possible you already own a few of these albums. Give those duplicates to a friend and they will love you even more!

If you want a 20-4-45 box, email sr.projekt@gmail.com with “20-4-45 please” as your subject. Include your snail mail address. I will reply with payment instructions. As the weekend is coming up, you might not hear from me until Monday…