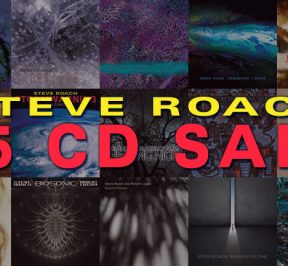 A wide selection of Steve Roach’s passionate & powerful electronic ambient CDs are on sale — just $5 for single discs & $10 for doubles or triples! Special pricing limited to one week. (Bonus good news: Projekt pays Steve and his collaborators full royalties on these items.) We’ve got so much great music in the warehouse; we’d much rather it lived in your CD player where it can be enjoyed!! Pick through the bins and take home some great music today 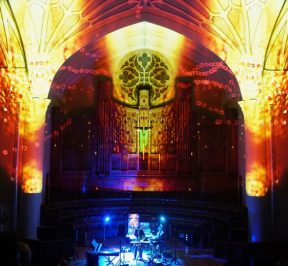 Steve Roach is headed out to Santa Fe for his two concerts at Paradiso this weekend. On Saturday Steve is joined by fellow electronic innovator and collaborator Michael Stearns (Kiva, Desert Solitaire) and didgeridoo master Rob Thomas (Inlakesh and Monuments of Ecstasy.)

Steve's recent concerts are intense, intimate, immersive and stunning. From ethereal segments off "Structures from Silence," to not-yet-released driving analog sequencer pieces, to tracks from his latest releases and from the classic Dreamtime Return, Steve's set is a 2-hour career-spanning immersion in the realms of electronic music. As I type this, I am listening to this youTube video with excerpts from Steve's recent Pasadena Ambient Church concert. It's incredible — the intensity and focus Steve brings as he crafts a stellar flow of music, taking us on a journey of sound all in real time with real instruments!

A not-to-be-overlooked aspect of Steve's concerts is the community of fans who gather for the event. People fly from Europe — as well as from around the country — to be there. It cool hanging out with people I met at previous concerts, as well as making new friends. I try to get to town a day early, settle in, hang out, find the local brewery or taco truck. Mercy and I had a nice berry pie for breakfast the day of the Pasadena show, walked by the space where the '92-'95 Projekt office was located (the building is gone now), and celebrated their birthday with cupcakes! It's so worth it! Taking some time out of our busy life to do something different, fun, new! Experience some of what life has to offer!

It's also interesting spending time with friends who've gotten involved as facilitators with Plant Medicine and Technologies of the Sacred. Last time we met, they were in rock n roll bands, now they're helping people journey and heal from past trauma. Great to see people doing this work — our society needs more understanding, pain relief, and consciousness enhancements.

I'm flying with Mercy to Tucson for the November concerts, which are part of the All Souls Procession — a weekend-long celebration that incorporated many diverse cultural traditions with the common goal of honoring and remembering the deceased. The weekend culminates on Sunday November 3 with Steve's performance at the finale ceremony, with as many as 100,000 people coming off the parade route and crowding the streets for the event. The day before — Saturday the 2nd — Steve performs a full concert at MSA Annex outdoor festival venue.

Tucson, here we come! I've got our room booked at the 100-year-old Hotel Congress, the designated hotel. It can get loud at the Congress, it's an old building right in the middle of a hopping dance-club-filled downtown. It's a great space though, nice restaurant and five bars — worth the noise. I stay there every time I visit Tucson. I hope some of you make it out to this once in a lifetime weekend. Drop me a line if you're going, so we can say Hi in person!

New York City 2020 Exciting news! Steve confirmed his first ever New York City show; tickets now on sale. It's an Ambient Church concert on March 28, 2020, in the beautiful St. George’s Episcopal Church off Stuyvesant Squark Park, between the Gramercy Park and East Village parts of town. I expect I'll be there too. It will be nice to visit the city after being away for a few years. video for “Synesthete” from BLOOM ASCENSION

Projekt’s Sam Rosenthal edited a montage of Steve Roach creating in the studio set to the track “Synesthete” from BLOOM ASCENSION — watch at youTube. 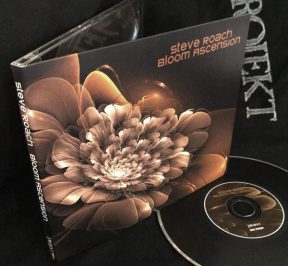 Steve Roach has the #5 New Age album on this week’s Billboard Chart! 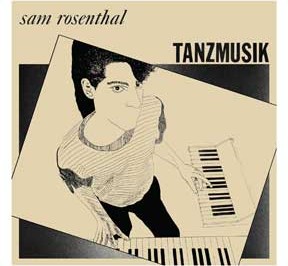 Sam's 1984 album of minimal-synth / synthwave is #free on Bandcamp for a limited time.

Originally released on vinyl in March 1984, Tanzmusik is one of minimal synth’s top Holy Grails. Recorded in the electronic style now known as synthwave, it was the first LP from Sam Rosenthal, founder of the iconic Projekt Records label and mind behind one of the most influential darkwave acts out of the US, Black Tape For A Blue Girl.

A historic work that deserves to be torn from oblivion, Tanzmusik was completely recorded at home on a four-track TEAC-2340 with a super minimal setup (Korg Poly-61, Moog Realistic Concertmate MG-1, Boss Dr-110 and some effects). The ’84 vinyl release was limited to 250 copies with a tannish card glued to a white LP jacket; the re-release in 2012 was an edition of 500 on Italy’s Mannequin label. All physical formats are once again sold out, but the album lives on in the digital world, with a name-your-price-download at Bandcamp.

In 2012, The Big Takeover wrote: “Released at a time shortly before the forming of his band, Black Tape for a Blue Girl, the listener might well be stunned by what they hear. Instead of the dark — some may call it ‘goth’ — sounds that he would soon become famous for, Tanzmusik is a record that is oddly upbeat, somewhat poppy in nature, yet with a prog-rock heart that’s equally undeniable. It’s not quite New Wave, it’s not quite progressive, it’s not quite darkwave — but it is an interesting compilation of the ideas of a talented young man with numerous ideas in his head about directions he could go. “

Recorded when Sam was 19, the album continued in the “electronic mood-music” tradition established on three earlier cassette-only releases. With the added intrigues of the drum-computer, Tanzmusik explored the realms of electronic music that critics at the time compared to Tangerine Dream, O.M.D., Brian Eno and these days also compare to Cluster and the first Human League.

Sam writes, “When contacted about a re-issue in 2010 by Alessandro Adriani at Mannequin, I decided to remaster the album for them. After getting the digitized recordings back from my mastering guy in Canada, I discovered it wasn’t the stereo 2-track mix at all but the actual 4-track recording. Wow! I thought the multis were long gone, but here they were in pristine digital form! I remixed the album in my studio, staying true to the original – while bringing back a few instruments that were buried in the '84 mix. Sonically, the current version sounds even more incredible than it did back in 1984!”

"Before I remixed the album, I had not listened to it in probably 15 years. In my memories of the album, I thought the ambient songs were the good ones, and the synth-pop ones were the weak link. But now I think I like the synth-pop ones — like “Alone” and “We Return” — more. On the other hand, I really like that sequencer at the beginning of “The Coming Fall.” If my Korg Poly-61 wasn’t dead, I would set up that patch again and write something new around it; I still have all the notes for my synth settings for the songs. Scary. Overall, I am a lot happier with the album than I expected to be. When Alessandro got in touch with me about releasing it, I was sort of skeptical, and procrastinated a whole bunch. But when I started actually working on it, I liked it. It’s quite a nice album. Schizophrenic, but that’s OK."

Sam Rosenthal is an American artist. He is the founder and leader of the band Black Tape For a Blue Girl and the record label Projekt Records (35th anniversary in 2018). He lives in Portland Oregon with his son and cat. Black Tape For a Blue Girl — begun in 1986 after his move from Florida to California — serves as a vehicle for Rosenthal’s musical vision. Its signature combination of gothic, ethereal, ambient and neo-classical elements explores existential themes of loves lost and passions yet to come. After releasing 9 cassettes and the LP of his early electronic work prior to 1986, he developed a full-fledged band whose members revolve around Rosenthal’s subtle electronic foundation. In the last few years he has also been releasing electronic solo work under the names As Lonely As Dave Bowman and Sam Rosenthal, as well as collaborations with other artists.