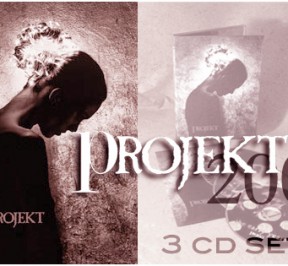 When you released your first album for Projekt, did you expect you wouldreach 200 releases?

Sam Rosenthal: Ha! No….. of course not. That was 24 years ago, and I was just putting out some cassettes. I had no idea it would become my job, and the way I live more than half a lifetime later….

Was it easy to select the tracks included in the three cd celebrationbox? We think it was not, considering the 199 previous releases you could selectthe tracks from, plus the unreleased tracks

Sam: Well….. I found it pretty easy. I have been thinking about this release for a couple of years. So my brain was always “processing” this question. So when the time came to actually do it, decisions had already been made. I think that’s the way my brain works, when I am designing a cover, as well. I already have an idea of the elements, so then it’s just to actually DO IT. I knew there was an remix here that nobody had heard, or an overlooked song there that I wanted to include (such as Arcanta). So it wasn’t that hard.

A statistical question for you: which Projekt album sold best? And howmany copies of it have been produced?

Sam: The best selling non-compilation release was black tape for a blue girl’s Remnants of a deeper purity which is somewhere around 17,000 now. For compilations, the best seller was Projekt: Gothic, which is around 23,000. People often have this misperception that bands sell 20,000 CDs with every release. But let me assure you that this is not the case. All of us indie bands really NEED the support of our fans. We need those sales, to keep us alive and making art.

Is there any album that sold less than you expected?

Sam: Of course. But I don’t think that it would be very kind to talk about that.

Did you ever think of releasing a vinyl edition of some of the albumsincluded in your catalogue?

Sam: Yes, I have thought about it. And then 10 seconds later I slap myself and ask, “What are you thinking?!” When we get a vinyl release in our webstore, from another label, we are lucky if we can sell 5 copies. People always talk about vinyl, but I cannot find anyone who actually buys it. Who even has a record player? I have one in a box, that I haven’t opened since 1995 !!!

Apart from the objective criteria of quality, and the fact that you must like the music, which other characteristics must a band have in order to work for Projekt?

Sam: The people need to be charming and nice to work with. I do this all day. It’s my job. The last thing I need is to deal with assholes. (laughs)

What advice would you give to a band who wants to send you a demo, hoping they will work for your label?

Sam: Please don’t. It is very rare that I sign a band from a demo. It would be better to send a link to your myspace page. Then I can listen, without feeling guilty about what to do with the demo, the packaging, the paper inside of it. It’s bad for the environment to send me demos.

Are there some groups or artists working for other labels that you would like or you would have liked to join your “team”?

About the mp3: according to many in the music field, mp3 damages the sales of music and so they damage music itself. Some other think that they can increase the sales and that they are good promotional material, because they allow listening and discovering unknown bands, or allow listening to some traks of an album that otherwise should be bought sight unseen (or, better, traks unheared). What do you think about mp3 and how do they affect the work of your label?

Sam: I used to think that it was a great thing that people could hear an MP3 on-line, and then they’d go out and buy a CD. But my optimism and faith in the human race has been defeated by the fact that people just download stuff illegally now. Music is Art. And artists need to pay their rent and their check at the restaurant., just like the rest of us And these days, people just steal us artists blind. Why don’t they go and rob banks and liquor stores as well? It’s just as horrendous. So, I think MP3s are killing bands.

Considering the long life of Projekt and considering how many artists that have worked for this label you could have enough material to write a book about its history. Did you ever think of writing a book? Is there any funny or odd anecdote you want to tell us?

Sam: Well, I’d prefer to work on my fiction book, rather than write about the ugly truths. There is so much I could say, but most of it would just come out sounding nasty and stupid and bitter. This scene is full of goth drama, ya know. I prefer to meet and hang out with people who are positive, creative & interesting. Recently I met Lucas from Cinema Strange and Deadfly Ensemble. What a great guy and what a captvatng performer.

Speaking of books, when we interviewed you in 2004 about the Black Tape For a Blue Girl, talking about the texts of “Halo Star”you said thet you were writing a book about a group of female artists from 1920’s Prague. Did you finish it? If yes, has it been published in the USA and in other countries?

Sam: Well…. I have slowly…. sloooooooowly been finishing it. I did a bunch of editing and re-arranging in October, and I think it is in final form. I would love to find a publisher for my book. People who read it have really nice things to say about it. I’d also love to come up with a name for it. I’ve also started working on new songs, which have nothing to do with the story from the book. In my head, I am calling this new album “Ten Neurotics.” And as you can guess by that name, it’s going to be about some interesting characters…. I have 5 of them started! I hope I can get a lot of progress done this summer, and maybe have it done for the fall. That would be wonderful!

Sam,thank you for your time and kindness, and we wish you that the Projekt catalogue will get to nr.400!