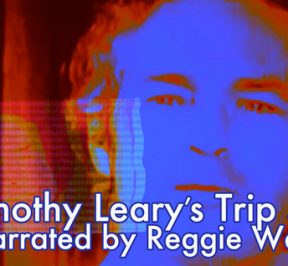 From Projekt’s Sam Rosenthal: I find myself spending more and more time watching youTube on my living room TV. It’s becoming the all-knowing archive of everything! With that in mind, Projekt & Steve Roach are creating more visual material for you to enjoy. In the last few days, we’ve added these new clips:

I found a short bit of video on a backup harddrive; I mixed that with some photos to take you on a brief tour of the creepy attic of the 2009 Brooklyn office, and recount the story of the roof collapse. Happy Halloween!

To commemorate the centennial of Timothy Leary’s birth, I recorded an electronic space music/art rock collaboration with Projekt’s artists, including 4 short Trips with Leary’s words. This clip has narration by Repo Man director Alex Cox.

Stream starts at about 25:38 minutes in. Enjoy a replay of Steve’s Saturday Livestream concert, a 90-minute show followed by the premiere of 3 videos from the new album Tomorrow.

January 16, 2010, Black Tape For A Blue Girl performed our 126th show — the 7th with the new 3-piece line up of Athan Maroulis, Nicki Jaine & Sam Rosenthal. The 30 minute slot at Dracula’s Ball included 6 songs off the then-new 10 NEUROTICS album, and 2 tracks off HALO STAR.

This track is narrated by Reggie Watts, bandleader on CBS’ The Late Late Show with James Corden. I did some Nam June Paik-inspired video art effects in the middle. 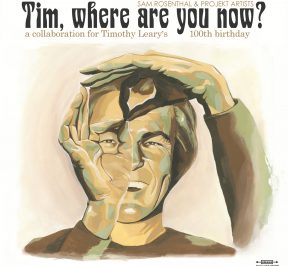 a feature in Brooklyn Vegan

Sam talks about the album…

Sam — Well, first it’s a listening experience. It’s music — new sounds and new spaces. The narrators read short scripts that float within the music. The trips come from Leary’s writing. He’s question reality — Is this thing that seems to us to be so firm and inviolable actually real? Is this actually what it appears to be?

Leary wrote in 1968, “…since that first LSD trip, it remains impossible for me to return to the life I led before, unable to take myself, my mind, and the social world around me as seriously.”

Q — How did you gather these musicians and readers?

Sam — I asked Projekt musicians to send me sources to work from. I wasn’t looking for finished tracks, this wasn’t a compilation album. I asked artists for bits of music, perhaps unused individual instrument tracks from their projects. My idea was to compost those sources and make new music. I’d listen to their source, see what ideas it brought up, which portions I’d like to focus on, what sort of song it inspired me to create. I might use an 8 second bit of their source and loop it, or a longer segment as a texture to build upon.

While these songs are collaborations, the structuring, editing, processing was my contribution; I also add my electronics here or there where a texture is needed. On some tracks, I’d get a structure for the song flowing and then go to a specific musician with an idea for a part they could add on top, such as Erik Wøllo’s driving electric guitar part on “Reality-tunnel,” or Ryan Lum’s bossa nova-flavored guitar part on “PSY PHI love means High Fidelity.” Or Steve Roach’s drone in the 2nd half of “Reality-tunnel.” I sensed that area needed some low-end support, and I knew Steve was the magic man to give it the texture it required.

The other track I created with Steve was “Molecular symbol, thinking” which is very abstract and spacey. Steve being ever-prolific sent me a gigabyte of great source material to work from. All of it really lovely. This source stood out because it was oblique, with a psychedelic spaciousness. I edited out some of the places where it took form, to keep it on an abstract level. Listening to Steve’s track, I envision my thoughts drifting away like a train on a swirling track heading off into deep space, the cars growing further and further apart as the packets of thoughts begin to distort and lose their connection and form. It created exactly what I wanted to occur at that point in the album. About two and a half minutes into the piece I laid in a little bit of Erik Wøllo’s processed electric guitar textures — painting with their sounds. I didn’t worry about BPM, or even what key the pieces were in. It was just a question of, “Do these elements sound good together?” Then another minute in I’m playing a short 4-note pattern, giving a bit of earth under your feet. At the end I brush in a bit of Jarguna’s modular synthesizer textures to add some sparkle as the track comes to a finish.

For the narrators, I was looking for marquee names to help spread Leary’s words out further. I sent a ton of emails, asking agents, contacting friends to see who they knew who might be interested. The first on board was Alex Cox, followed by Lee Ranaldo. Hearing them on the finished tracks was exciting! The pieces worked as I had imagined them. Yes! Perfection!

Q — What is your definition of a “trip?”

Sam — Speaking with people at Portland Psychedelic Society meet-ups (pre-pandemic, of course), I know there are all kinds of trips. Some are purely body, energetic experiences. Some are purely visual. Aside from an LSD trip when I lived in Los Angeles in the 90s, I hadn’t done any psychedelics until 5 years ago, when I accidentally discovered that I easily trip on edible THC. For me, trips are very hallucinogenic with experiences that feel absolutely real in the moment. Visuals, sounds, emotions. A single trip contains hundreds of short vignettes, many are past-life experiences. I am there as the observer, and those observed. I rotate consciousness through the people in the scene, often overlaid at once.

Timothy Leary and Stanislav Grof both came to psychedelics from the therapeutic angle: guiding subjects via psychedelic-therapy in a safe environment with attention to set and setting. Grof speaks of our internal healer who knows what we need at that moment; our trip is directed by that knowing. I am very much of the mind that psychedelics have great therapeutic benefits. MAPS.org is proving this with the success of their FDA-approved MDMA trials for PTSD. Psychedelics are also helpful for addiction, depression, and end-of-life anxiety (Rick Doblin, executive director of MAPS, reads one of the trips in the digital bonus material.)

Of his first psilocybin experience, Leary later said, “I learned more about my brain and its possibilities and more about psychology in the five hours after taking these mushrooms than I had in the preceding fifteen years of studying and doing research in psychology.” Progress and connections can be made during a trip that cannot be made in talk-therapy. When the mind is free to wander outside of the ruts, interesting new answers that were not previously available are found.

If you share this page on social networking, please include #timothyleary100 & #TL100