“Once you label me you negate me.” – Soren Kierkegaard

Hello to everyone on this day of non-laboring.

Underneath all the androgyny and fluctuation, the book’s about human connection. Rosenthal’s use of sex and gender identities to illustrate how we reach toward and away from relationships is merely a new approach to an old idea: We all need intimacy with others to deepen our understanding of ourselves.”— Time Out Chicago.

One of the subtexts of Rye comes from a nugget I found in Buddhism’s Diamond Sutra text. As in the Kierkegaard quote above, it’s the idea that most of the time we don’t see things for what they are, because we are misled by our perception of the thing. Once we categorize or describe something, we expect it to behave like the label we have ascribed to it.

In this bit, Matt (the narrator) relays to his partner Rye (a science teacher) a few quotes from a monk he interviewed for a documentary he’s working on:

“ ‘Where there is a description there is a deception.’ And something about ‘we’re all part of the continuity of things changing their form, because the real nature of things is that there’s no definable single state.’”
“I was with you there at first. But that second half…?” Rye sounds doubtful.
“Rye, the world changes under the weight of our perceptions.”
“That’s crazy-talk, Matt! Things are what they are. Don’t taunt me.” I picture his wrinkled nose and frown. “I respect Buddhism, but it can be a bit out there. Science is absolute.”

Later in the story, without really noticing it, Rye has a more understanding view of the topic. This is an exchange between Rye, and Mischa (Matt’s 12 year old son), as they walk home from Misha’s Summer Camp.

“It’s different from what you’re usually taught,” Rye says.
“Dad reads to me about something like that. About illusions and not being stuck in how we describe things. The words that are just a story.”
I smile at Mischa, proud that he made the connection.
“Yeah, you got it, kiddo,” Rye says, standing slowly and patting his shoulder. “They’re all a bunch of words. I’m just me. You see who I am.”
“…and the words don’t really matter,” Mischa says, finishing Rye’s thought.
“You two are great,” I say, taking one in each arm. “I think I’m gonna keep you both.”
Rye smiles and kisses my cheek.

Since concluding Rye in 2012, I’ve been thinking about the follow-up novel; my plan is to pick up where the story left off.

I’d like to report that I’ve been doing more than “thinking about” it and actually “working on” it. But that wouldn’t be true. I’ve been unable to begin, as often happens after finishing a creative work. Some artists go right back to work; they use their head of steam to get down to business. I’m different. I always feel the need to delay and collect new ideas; to let the sail deflate, and wait for the next breeze.

Reading Thich Nhat Hahn’s book, The Heart of the Buddha’s Teaching, I came upon this line:

“In The Discourse on the Many Realms, the Buddha taught that all of our anxieties and difficulties come from our inability to see the true face, or true sign of things, which means that although we see their appearance, we fail to recognize their impermanent and interbeing nature.” (Page 77)

I like that this builds upon Rye‘s thread about failing to see things as they are. My brain quickly connected that with other ideas concerning relationships, and the pain we feel when they crumble. I wrote this in my journal:

Part of suffering comes from our attachment; our inability to accept that everything is transient. We fall in love, and we want it to stay that way forever. We take it for granted when we have it. And we don’t want it to end when we have already lost it. How can you enjoy love to it’s fullest while it’s happening, yet let it go when it’s over? Can we say, “That was nice, and now it’s gone”? Because that’s going to be true of everything in life: there is nothing we will take with us, at the end. How can we enjoy it to its fullest and then smile and let it go?

This got me quite excited.

It seems that one of the hardest things to do is to live with this sort of non-attachment.

Many assume ‘non-attachment’ means to not care for things. Rather, it means to care deeply, yet also to allow things to be free; to not hold too tightly. “Overcoming attachment does not mean becoming cold and indifferent. On the contrary, it means learning to have relaxed control over our mind through understanding the real causes of happiness and fulfillment, and this enables us to enjoy life more and suffer less.” – Kathleen McDonald, How to Meditate

Thich Nhat Hahn says there are three essential elements: Non-attachment, impermanence and bliss. I think a thorough understanding of the first two leads to the third; Hahn would also say that they all inter-are. That you cannot have any one of them without the other.

Much to think about.

New in the store

Listen to Gavin Bryars’ Sinking of the Titanic performed in an aquatic center. This is a pretty great live rendition of this piece. Video at youTube.

Maybe Raccoons are the new goats which were the new cats. Oy! These things change so quickly! Raccoon dentist at youTube.

I posted a Facebook link to this New York Times article. As a boss, I totally endorse what it says; I think it’s CRAZY that many of my friends are expected to answer their work email 24 hours a day. Screw that! You’re not slaves; employers don’t have the rights to expect replies when you are off the clock.

My friend, Sam Saia, replied: I’ve always refused linking my business email to my cell phone for this very reason. My shift begins at 8:30am and ends at 5pm Mon-Fri. End of story!

This blog by Tim Ferriss talks about making more time for your own work, by spending less time taking in other people’s work. To that end, he suggest checking your email only twice a day! “The real hard part, of course, is keeping yourself away from that damn inbox. Get on a strict low-information diet and focus on output instead of input; your wallet and weekends will thank you for it.” 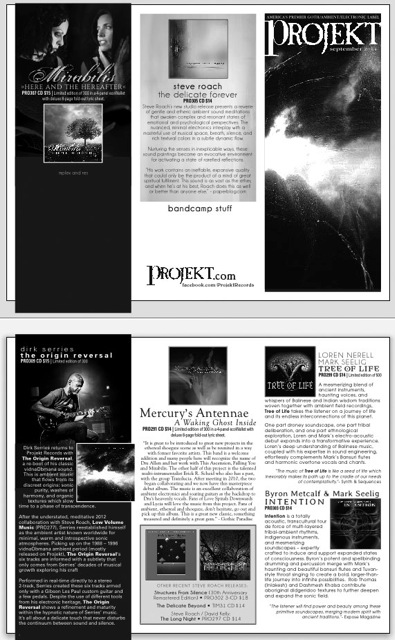 <--- I'm working on a new Projekt 3-fold flyer; this is a screengrab of it in progress. If you've been around since the early days (ie: 80s and 90s) you might remember getting one like this in with your order. That was back when I was Projekt's label-chief and mail-order person, working out of my house in Garden Grove and then Eagle Rock, CA.

People have been asking me to get back to paper catalogs… which I interpret as yet another sign of our overload and annoyance with all this modern technology. Look for these in with your orders very soon. I’ll have a way for you to order a few, even if you don’t order physical CDs anymore. I know people enjoy reading them and handing copies out to friends. The dream of the 90s is alive… etc! : )