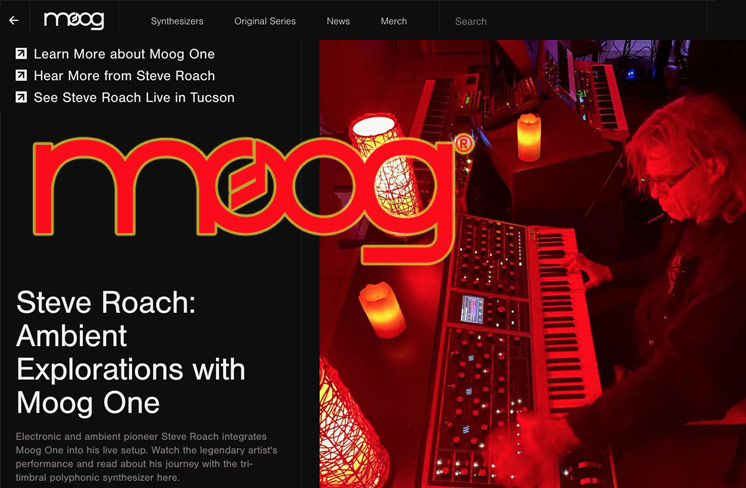 Few can claim such accolades in composition as Steve. Boasting several Grammy nominations and a body of work that helped to define the golden age of analog synthesis, Steve’s catalog spans over 100 solo albums, live recordings, and collaborations. He is still composing to this day, adding to his impressive catalog and inspiring the world of ambient music.

A revamp of Steve’s 2004 Space And Time album is name-your-price at Steve’s Bandcamp page. We’ve added extended excerpts & extra tracks. Essentials 1984 — 2004 Space and Time invites the listener on a 90-minute journey into the extraordinary electronic soundworlds of Steve Roach.

👉 Black Tape For A Blue Girl vocalist Jon DeRosa’s band is Aarktica. Jon created something special for Projekt fans. Aarktica Mixtape V.1 – The Early Influences is “a playlist that highlights some of my early influences, artists and composers who I was listening to a lot of in the early days and who influenced Aarktica’s sound in the No Solace in Sleep era. This is by no means a comprehensive list, but it does include some great artists. Enjoy!” Playlist streaming at Spotify.

👉 theAdelaidean (in literary mode, as Sean Williams) has a new book out; Honour Among Ghosts is available from Allen & Unwin. It is a “sidequel” to his multi-nominated novel Her Perilous Mansion for readers aged 10-up. theAdelaidean is also part of a massive Kickstarter for four new anthologies from the legendary small press Zombie Needs Brains. You can learn more about that, and his music, by watching this short video interview with Sean.

👉 Erik Wøllo is finishing his new album for a January 2023 release on Projekt. Listening Booth Projekt’s playlists at Spotify and Soundcloud and Pandora.