Sonic innovator Steve Roach received a Grammy Award nomination for his inspired Spiral Revelation release! As one of the original architects of the ambient/electronic genre, Roach’s 40 years of creating genre-defying soundworld experiences immersed with vital life energy and passion has been recognized by the members of the Recording Academy in this Grammy nomination for “Best New Age Album.”

An emotional through-line brings life to Spiral Revelation as the unfurling of time’s windings connects to the vivid present, life-affirming and illuminated. The release is a masterful expression of an artist who has infused his soul into the art form of electronic music through years of dedication exploring sound via hands-on synthesis.

Purchase the album from Projekt.com, on sale for $10
Stream the album at Bandcamp
Image downloads
Longer bio (from 2018) |

Spiral Revelations. The sound of life, interconnected and unfurling. The spiral – a visual symbol of eternity – is a reoccurring metaphoric theme in Steve Roach’s pioneering electronic work. Interpreted into musical form, these six spiraling sonic experiences offer a living activation that connects with a sense of the infinite. Roach’s long history and love of analog sequencer-based styles reveal a continuing, evolving awakening within Spiral Revelation’s 63 minutes. Focussing the mind’s ear upon a filigree of intricate patterns woven with a direct hands-on approach, the artist sculpts and caresses sound into being in real time. An emotional through-line brings life to these pieces as the unfurling of time’s windings connects to the vivid present, life-affirming and illuminated. A masterful expression of an artist who has infused his soul into the art form of electronic music.

Projekt is a Portland, Oregon-based independent record label that specializes in electronic, ambient, gothic and darkwave, started by Sam Rosenthal in 1983. Prominent Projekt artists include Rosenthal’s own Black Tape for a Blue Girl, Steve Roach, Eric Wollo, Voltaire and Lycia. With over 350 releases, it is one of America’s longest running independently-owned recording labels specializing in the electronic music genre.

musictap.com
synthtopia.com
Echoes Radio. John Diliberto writes: Steve Roach tops this excellent 2017 Grammy New Age cast. Spiral Revelation stands out as a true, mind-tripping, trance inducing album. Roach has been recording since the early 1980s, he’s approaching 200 releases, and he’s one of the first names mentioned in certain areas of electronic music. But he’s never been nominated for a Grammy award. But this year, through some quirk of coincidence, talent, artistry and persistence, he’s broken in with Spiral Revelation, a quintessential example of Roach’s sequencer driven oeuvre. 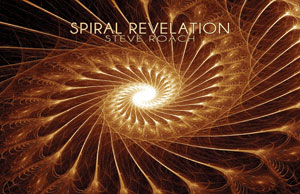 Download a free 11×17 poster at http://www.projekt.com/Posters/PRO336-Poster.jpg . Print it on your color printer, or at a local printshop. And please email a photo of the poster at work, at home, etc, and we’ll post your photos on Steve’s Facebook Page.