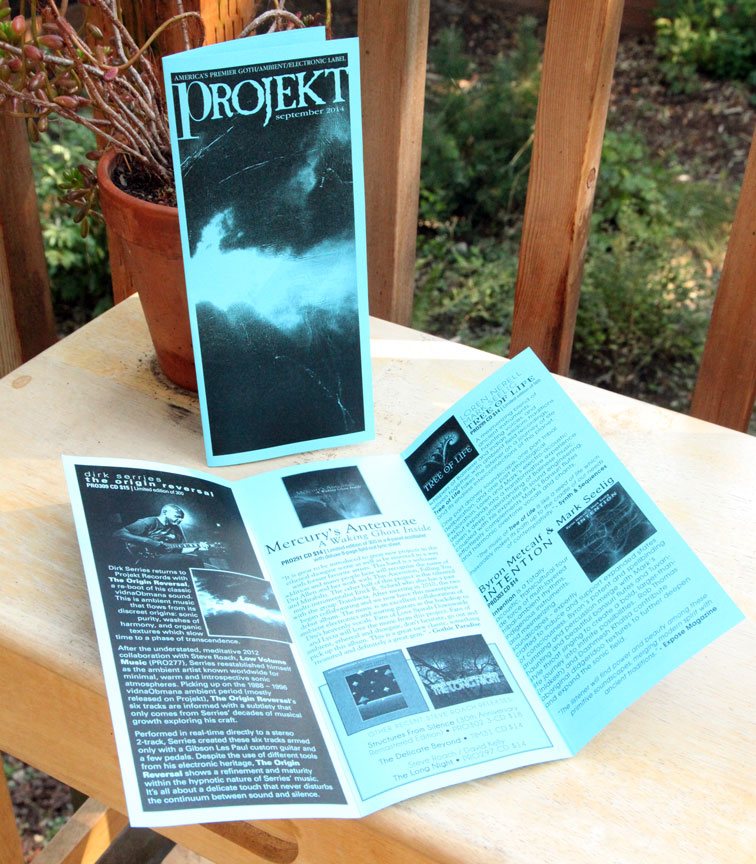 Back in the old days, I mailed tons of Projekt catalogs. I was telling my son about the early 90s, when I’d have 10,000 catalogs spread across my entire living room, as I sorted them by zipcode for bulk mailing. It was like rows of crops, waiting to be harvested and bagged and driven to the post office in South Central Los Angeles (This was after the 1992 L.A. riots; honestly, I always felt a bit nervous about driving down to South Central).

Before I got into printing those large 24+ page catalogs, I’d print 3-panel flyers at the local P.I.P.

A few of you messaged to tell me you really liked the paper catalogs, and I agree: it’s fun to hold something in your hand when you’re listening to your new Projekt order. So, while they last, when you order at projekt.com, you’ll get a limited edition Astrobright Lunar Blue 3-panel flyer, featuring Dirk Serries’ The Origin Reversal on the cover.

Of course, if you’ve moved on from physical objects, yet still want a catalog, I’ll take care of you. For the first 20 people who contact me at sr.projekt@gmail.com, I’ll give you details to paypal me a buck (for USA postage, more for overseas), and I’ll throw two of these in an envelope to you.

I only made 246 of these 3-panel flyers. When they’re gone, they’ll be gone (and then I will make a new one with a different design).

* Dirk Serries interviewed on a Norwegian radio station about his ambient history and The Origin Reversal release on Projekt.

* Erik Wollo’s Timeline reviewed at hypnagogue.net: “Emotional and filled with sonic imagery, it absolutely demands repeat listens. Superb work from a true master of the craft.”

* You might know that artist cannot copyright song or album titles. But there’s an interesting fact, that we can trademark our titles. I discovered this, when reading about The Red Hot Chili Pepper’s lawsuit against Californication at out-law.com. And here’s what I found even more interesting:

A quick search on Rolling Stone’s Top 10 Greatest Albums of All Time at the trade mark registries of the US and UK shows that none of the album titles are protected by the artists or their record companies. An individual applied to register Highway 61 Revisited, the Bob Dylan album that appears at number 4 in Rolling Stone’s list; but that application was abandoned. Rubber Soul, ranked number 5, is registered as a mark, but not to The Beatles. And Sgt. Pepper’s, the top-ranked album, is registered as a footwear brand by a company in Spain and as a pepper spray brand in the US. David Bowie appears to be more savvy than most of his counterparts, though: he has registered Ziggy Stardust as a trade mark for music and entertainment services. The Rise and Fall of Ziggy Stardust and the Spiders From Mars is ranked at number 35 in Rolling Stone’s list.

Huzzah to Bowie for being savvy enough to trademaqrk Ziggy!

* Nick Eakins sent me this message on Facebook: “I just got back from our local coffee house. I played a couple of Mors Syphalitica tunes for them and they played some death metal. Ethereal Goth is like floating on a cloud making love to angels. Death Metal is like getting hit upside the head with a shovel and being sodomized by a gorilla.” To which I replied: “Um, Both good options! : )” <----- A few weeks ago on the blog, I included some magazine covers that are icons for me. Here's a real cool magazine image I've never seen before. A fan on Facebook said it was the CREEM ad for Lou Reed – Live.

Speaking of which, it seems absurd that Lou Reed – Live and Rock ‘n’ Roll Animal are two albums, considering they are the same concert. That show should be put together, and released as one album

A pat on the back 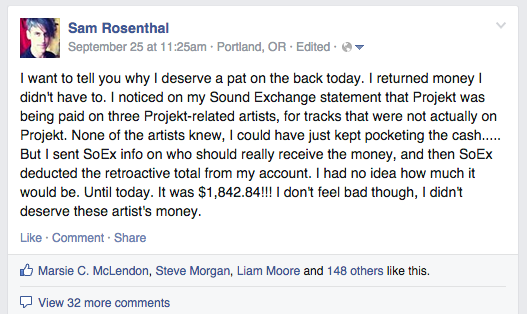 As always feel free to comment below. If you are signed in, your comment appears immediately. Otherwise, it will appear when I get on-line to approved it.

If you want to share this blog, here’s the shortcode: https://www.projekt.com/store/?p=6341
Thanks.
Sam