the dust it settles all around
and through the fire comes better days
and all these memories burn away
– Lycia, “The Burning Circle”

Over the last 20 years, Projekt has brought in over $7,000,000 ! Color me impressed (sort of an aquamarine, a little on the green side). But don’t make the mistaken assumption that I lined my pockets with cash. Projekt was a very effective money churning-machine, moving cash around the economy. Nearly all of that money went right out the door.

Keep in mind that Projekt was really expensive to run back in the peak era (1995-1999):
* Projekt bought full page ads in Alternative Press
* Projekt had massive bills at the pressing plants. Those deluxe-packaged CDs were pricey to manufacture, I would have to order 5000+ CDs at a time, and often 3 big releases at once. Furthermore, while the option was there to press-for-cheap in China or the Czech Republic, I chose to press in the USA. It was the right thing to do, to keep the money in the “local” economy.
* Projekt artists were paid their royalties
* It cost $1000 to make a poster (film + printing).
* Each release had it’s own postcard
* At the peak of our time with Ryko Distribution, they got 400 – 600 promotional CDs for stores, and we sent another 200+ to press, radio, etc. For Lycia, that number was much higher, as they were touring a lot, and Pat was working on local press pieces.
* In that 1994-1998 time frame, Projekt was distributing tons of Hyperium and Tess and Cold Meat Industry CDs; after I moved to Chicago, the label had 11 employees with two key employees earning more than I earned, plus they got health care.

Yes, I took a salary, but nothing extravagant. Pretty much all of that seven mil was consumed by the business.

Now wait! Actually, come to think of it, Projekt consumed way more than what it earned. Projekt was building up debt on my credit cards.

Of course, fans in the late 90s had this perception that Projekt was much larger than we were. All those ads, and postcards, and catalogs helped build the mystique. I remember talking with Mike of Lycia about how fans on the road made guesses like, “You guys must sell 20,000 CDs!” “30,000 CDs!” Oh, if only!

A few releases did some lofty numbers, but these were the best-sellers, not the typical sales numbers. Black tape for a blue girl’s 1996 Remnants of a deeper purity was the biggest selling non-compilation release, with around 16,000 sold. Love Spirals Downwards first two albums were each not that far behind. Three compilations did extremely well; the two we released exclusively with Hot Topic: 2002’s Projekt: Gothic (27,000) and 2003’s The New Face of Goth (25,600); and the first Christmas CD, 1995’s Excelsis: a dark noel (15,000).

Projekt was really busy, and bands were getting out to their fans, but by early 2000, Projekt was in considerable debt. In fact, $180,000 in credit card debt, and the future looked like a downward slope. Yikes! That was the time when – if I had a business degree – I might have cut my losses and gone bankrupt. But that thought only flickered by in passing. I left Chicago for NYC; I downsized, huddled, got caught up on royalties due to Projekt’s artists, and slowly paid down the debt. In a way, I downsized Projekt at the perfect time. Most of America waited for the fall-out from the dotcom bust, and 9/11, to tighten their belts. Because of the excesses of the ’90s, Projekt was a year or two ahead of the crowd.

For a while there in NYC, it was only Lisa and I at Projekt. I kept releasing great music and finding new bands to work with. My budget was very sober and close to the bone.

At that time, people were still buying CDs, yet the music industry was changing. Napster existed from June 1999 to July 2001. On January 9, 2001, iTunes 1.0 was released, though it took a while to take off. Projekt’s sales were slipping (like every label in the music business); yet I was bailing out the waters of debt; the ship was righting itself (have I tortured enough metaphors?) When Lisa got pregnant in late 2001, I brought Shea on staff to handle the mail-order.

2002 was the year things really shifted in the industry; it was the year when Projekt’s key releases stopped selling in the 5-10,000 range (except for those aforementioned Hot Topic comps, which sold amazingly.)

Fast forward twelve years, I’ve been adapting and learning every since. Gone are the days when we’d regularly ship out 5000 units of a new release to stores. No more big tours, nor ad budgets, and a lot less cash flowing in and out the door. Projekt is lean. The staff hours are about the same as in the early 90s. I don’t work 60 hour weeks anymore.

When people say to me, “Projekt’s problem is you don’t know how to adapt to the times,” I shake my head and sarcastically mumble, “Yeah, right. THAT’s the reason records aren’t selling! It’s because Projekt haven’t changed since the heyday of 1997.” Not at all, my friends. Projekt is small but alive, and I’m enjoying my life. And things are good, thanks!

Coming in a future post: Mixing Lycia’s Ionia and A Day in the Stark Corner with Mike.

* It’s Portland, so of course you have a coffee shop / bar / laundromatte. Great concept!
* “Legendary Artists Show Support for Turtles Victory.” This is why I like Sound Exchange.
* Steve Roach’s The Delicate Forever reviewed at textura.org/. “Classic Roach, The Delicate Forever reflects his current obsession with tonality and colour, and is as refined an example of his time-suspending ambient-electronic artistry as one might hope to find.” Purchase the CD at Projekt for $14 or the download at Bandcamp for $10.
* Dirk Serries’ “The Origin Reversal reviewed at touchingextremes. Dirk Serries’ “The Origin Reversalconveys the awareness of a serene approach to the act of existing which is emblematic of the best contemporary ambient. The soundtrack of a slightly sorrowful recollection that, at the end, bends the lips upwards in a smile of affection for people and memories that have defined our earlier life.” Projekt for $14 or the download at Bandcamp for $10. 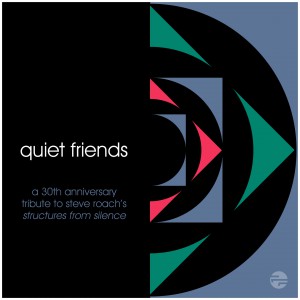 This gathering of quiet friends — this experience of hearing the mutual resonation to a sound and space we each, in our own way, connect to—-stirs so many complex and wonderful emotions for me.

In every piece, I can sense that inexplicable yearning and desire to enter into the limitless space, wonder, and quiet depth of just being. This was the seed for Structures From Silence.

The authenticity of connecting to the present moment is so alive here. This collection is living proof of an omni-present soundcurrent, one these quiet friends here have tapped into in their own powerful way to create a multi-faceted jewel of a release. I am deeply honored and moved beyond by your efforts.

Respect and gratitude for this gift to you all!