Jeffrey Fayman & Robert Fripp: A Temple In The Clouds (CD) 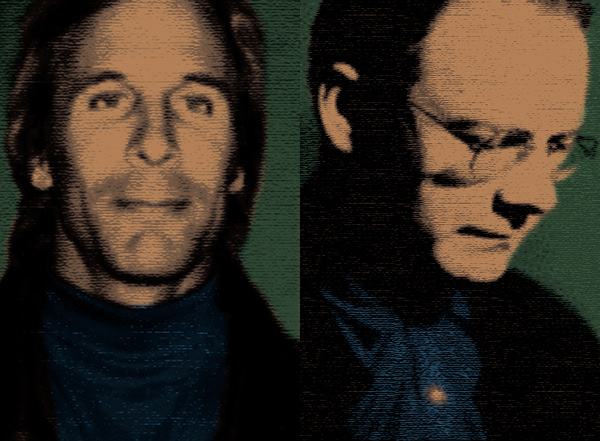 From 2000: A stunning album of looped Frippertronics and electronics, in the vein of the classic Fripp & Eno No Pussyfooting collaboration.

Recorded live from a past life. Awash in the hypnotic looping structures of Robert Fripp’s guitar soundscapes, Jeffrey Fayman adds an opulent cinematic brilliance to the proceedings, creating an intense and dramatic vision of a future rich in the heritage of Fripp’s past.

A Temple In The Clouds is a unique collaboration between one of rock’s most important and influential guitarists and a contemporary cinematic composer. Fripp’s contribution of two hours worth of treated guitar work (his trademark “Frippertronics”) formed the basis for Fayman’s layering of interwoven electronic soundscapes. Focusing on the subtleties and slight shifts in overtones and harmonics, Fayman & Fripp have created a dynamic musical kaleidoscope, ever changing and intrinsically radiant in each sonic fractal.

AmbientVisions: “A Temple in the Clouds is a spiritual and euphoric soundscape by Jeffrey Fayman and Robert Fripp(!). A glorious album of Frippertronics and contemplative sound sculptures. The sheer spirituality of their experiences shines in this ethereal ambience and insightful minimalism. The joy and beauty of the soul is touched. Piercing rays of bright and unfettered emotion overshadow the dark undertones. This disc is a spiritual journey.”

The Soundscapes of Jeffrey Fayman & Robert Fripp. A stunning album of looped Frippertronics and electronics, in the vein of the classic Fripp & Eno No Pussyfooting collaboration; released in conjunction with Jeffrey Fayman’s Tranceportation imprint.

Artist Background
Jeffrey Fayman’s background is in film music, having scored and licensed music for over 1500 diverse trailers including the current campaigns for “The Hollow Man,” “The Perfect Storm,” & “The Patriot.” His company, “Immediate Music” is one of the premier music production companies for motion picture advertising in Los Angeles.

Studying percussion and world music in college, Jeffrey eventually abandoned academic studies to pursue life as a drummer in various progressive bands (he recorded an album, Empire, with ex-Yes founding guitarist Peter Banks) before taking up the synthesizers in the early eighties. As he explains, “I soon realized I could use computer software and synthesizers to musically express complex pieces I was hearing inside and correct my poor keyboard technique.” Robert Fripp is the leader of the legendary art rock band King Crimson. Thoughout the seventies and eighties, he toured the world with his ever-changing ensemble. His collaborations with Brian Eno in the early seventies could arguably be referred to as the beginning of “ambient music.” 1973’s No Pussyfooting and 1975’s Evening Star defined a new realm of music, bringing a strategic looping structure – “Frippertronics” – to the world. While continuing with King Crimson, Fripp has released a series of albums in a similar vein — called “Soundscapes” — on his own Discipline Global Mobile label.

In the early nineties, a band Jeffrey founded and produced sent their demo tape to Robert, who said “I should play on that.” Fripp flew out to Los Angeles and performed on four tracks. Although Jeffrey eventually left the project behind, a resulting “gift” from Robert was a master tape containing two hours of Frippertronic Soundscapes recorded in Jeffrey’s studio which, (paraphrasing Fripp’s words), “you might utilize in whatever context you feel would be appropriate.”

Jeffrey details the story from there: “I had Robert’s tape sitting around for nearly eight or nine years and then I developed the idea of employing these Frippertronics as a method of creating atmospheric textures for lucid dreaming. Robert’s Soundscapes always seemed to help restore and heal my energy and concentration, so simply as personal experimentation, I layered several of them together and created complex interweaving atmospheres. I would then just sit in my studio and listen to them cycle for long periods of time.

“Focusing on the subtleties, I began hearing slight shifts in overtones and harmonics; my ear would follow one section of a loop for a while, and then become inadvertently drawn to another element which seemed to then be quite obvious, though I never seemed to have heard that part before… I soon realized they were causing some powerful effects upon my psyche.

“In listening to them, I began having very visual impressions and I started re-structuring and shaping the Soundscapes by editing and eventually adding my own instrumentation. My biggest problem in mixing them was to keep my concentration solid and to remember to move the mixing faders when needed, and to not be so pulled in, that I just sat there blankly staring at the speakers.

“What you hear on the CD A Temple in the Clouds is the result of much sonic and psychic experimentation, generous offerings and encouragement by Mr. Fripp, travels to healing temples in Greece, lucid dreaming, and defining those visions by utilizing Soundscapes.”