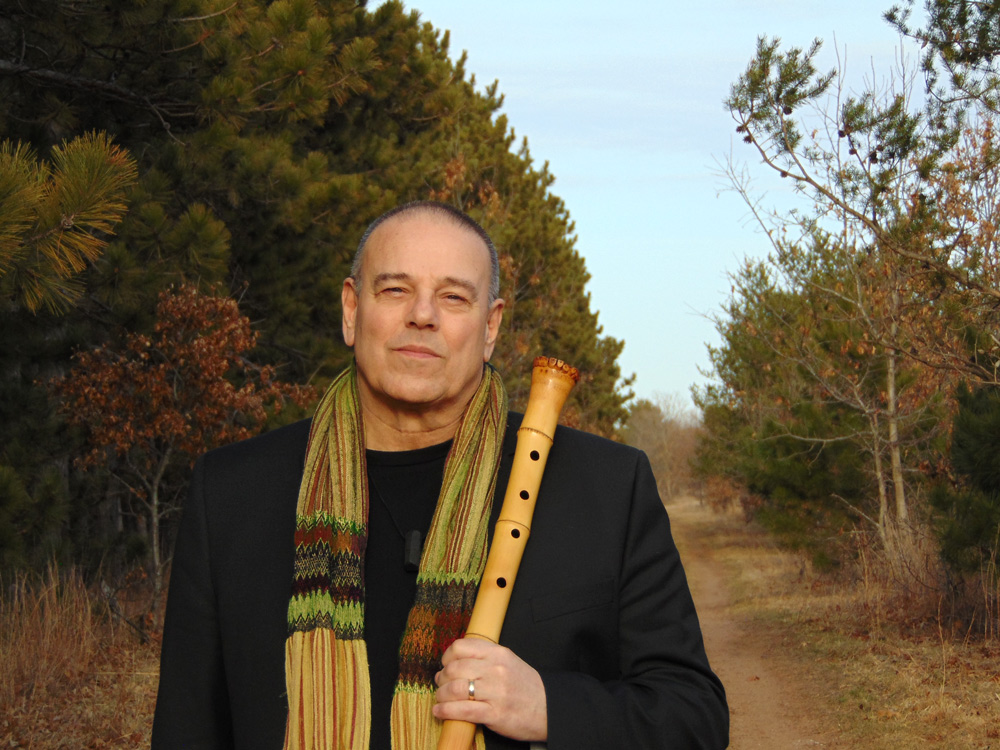 Peter Phippen picked up his first flute over 30 years ago: a small, crude bamboo penny whistle. He paid 25 cents for it.

“On and off in the 80s, I played fender bass with an avant-garde free-form improvisation group led by my mentor and University of Wisconsin-Eau Claire art professor Tiit Raid,” says Phippen. “We had a show in early March 1987, and I took the ‘new’ crude bamboo penny whistle along.”

During a conga break in one of the songs Phippen busted out the whistle while his mentor gave him the eye.

“I thought I was going to be in trouble for playing the little bamboo. But without saying a word, the next day on his way to teach, Tiit stopped by and gave me a bansuri bamboo flute from India and said, ‘Peter, if you’re going to play flute, play this.’ And that’s when it really all started,” he says.

It wasn’t too long before new flutes were placed on the altar. He was given a Japanese flute, a shakuhachi, by the flute professor at University of Wisconsin-Eau Claire, Tim Lane. While touring with a rock group, the band’s keyboard player found a broken bamboo flute in Louisville which he gave to the nascent flute enthusiast.

“He paid a dollar for it and gave it to me. Our next stop was St. Louis, Missouri,“ says Phippen. “I got that flute repaired, and for whatever reason that is the flute that changed everything. These three flutes became my teachers, but the old cracked and repaired one dollar alto bamboo flute more so than the others.”

Since that time, Peter has recorded 25 albums of his own improvised flute-based music. On these, he also employs four antique shakuhachi, one antique and one vintage bansuri, an antique Egyptian kawala as well as an African hunter’s whistle from Burkina Faso.

Phippen isn’t, however, trying to recreate music from the cultures of his various flutes. He is making intuitive music, his own interpretation of the instruments.

“To play just one of these instruments in a traditional manner would take a lifetime. So, my approach is very non-traditional. I play these instruments as improvisational tools to express myself musically,” he says. “I’m not playing music from the cultures the instruments are from. I improvise freely and put in a great deal of time on the instruments doing my best to get out of the way of the music that I’m channeling or allowing to flow through me out of the air. I am not trying to impress anyone with my playing; I feel my playing is simple. Yet, to play simply, these deceptively ‘simple’ instruments require constant attention.”

His goal, he says, is to play as naturally as possible and while he isn’t religious, he feels his music is spiritual rather than technical.

“Now the more technique you have, the more you can express yourself musically, so it’s a double-edged sword. One has to have technique to play free in case the unconscious flow of the music calls for that, but I feel there is no room for ego when improvising or imposing your will on the music as it is unfolding,” says Phippen. “Yes, I can play fast and all that, but I’m interested in saying something deeply meaningful with the fewest possible notes. To me it’s all about the tone and the phrasing of the notes played.”

Phippen notes that every culture on earth, excepting Australia, has an indigenous version of the flute. Each fascinates Phippen, especially antique instruments.

“I love Edo period and Meiji era Japanese shakuhachi. I also love the sound of vintage and antique bansuri and museum replicas of rim-blown flutes from the four corners area of the American southwest where the originals date from 600 to 1100 CE,” he says. “I like to play and record antique and old vintage flutes most, instruments that have been around the block a few times and have a ton of mojo.”

Curiously one flute Phippen doesn’t play is the familiar Boehm flute, but it is also interesting that before the advent of that instrument, Western flutes, too, were usually wooden.

“I do have some early 19th century wooden flutes and have recorded with them. The cylindrical Boehm flute as we know it today was introduced in 1847 and in my humble opinion is a recent development. I have seen and heard some recent contemporary wooden Boehm flutes as well,” says Phippen. “However, for my music, I find the tone of these instruments unsuitable for the music I am going for. I feel any simple system bamboo flute is superior in tone color to the Boehm silver or wooden flute as we know it today.”

He adds that a popular contemporary wooden flute maker told him he “lives behind a bamboo wall.” Phippen says, “I will always go for bamboo as my first option.” He knows the flutes made of other materials. He just gravitates toward bamboo.

“There are indigenous North American flutes, and these should be made of cedar, juniper, elderberry or box elder. There are also simple system wooden flutes from all over the world made out of various soft and hardwoods. And it seems I am a walking contradiction, as I play in a highly non-traditional manner,” he says. “Yet I like the instruments I play to be very simple and traditional in nature. Still in the end, there is something about the voice of bamboo flutes that I find intriguing, especially antique bamboo flutes.” 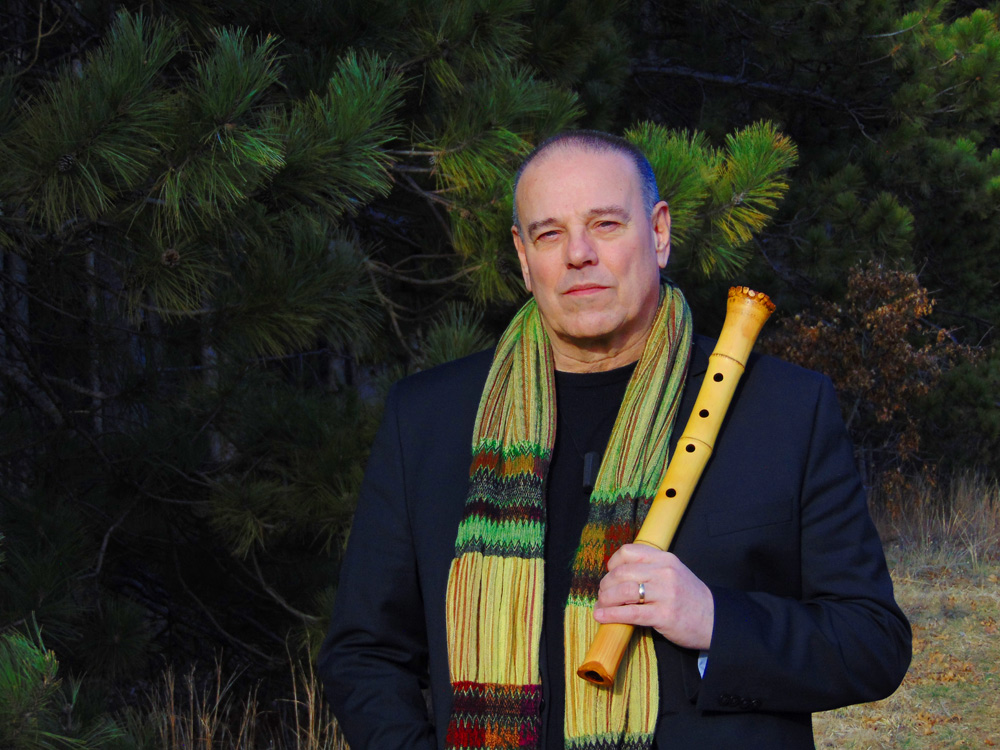 He has three modest collections: a modern one in case he has to play in a Western pitch, antique, which may or may not play with modern instruments and a “specimen” collection.

Even though he learned to improvise on the bass first, he moved away from it once he discovered the flute. He did play bass a little on his early recordings but did so as a matter of comfort.

“I do not feel the electric bass fits on my flute music. Early on I played bass for my first Canyon Records album, Book of Dreams, but only to serve the song, as I was not full-out improvising everything in 1996, there was a loose ‘form.’ After that I avoided it.” says Phippen.

He says that this could change even though he doesn’t see it happening.

“For my music I like natural and simple instruments, folk harps, gongs, singing bowls, box zithers, female voices, and African and world percussion, all supporting or talking back and forth with my simple bamboo, wood, and clay flutes,” he says. “The only electric instruments I hear in my music are synthesizer and theremin.”

Phippen says that he doesn’t control what he plays consciously but only plays what his intuition allows him on a given day.

“In a sense the music I’m playing is ‘living.’ Now of course there will be good and bad days, but that is only natural. Such is life. If my music sounds fresh after all this time, it may be because I live to play and love the feeling when the music is flowing through me,” says Phippen. “If it sounds cohesive, perhaps that is just my musical voice playing a variation of the same thing at a different moment in time. What I do know is that I play what I am feeling on any given day, following my intuitive instinct in hopes I end up in the ‘zone,’ that place where you become a medium and natural music that has always been there in the air simply flows through you. Some would call that magic.”

His improvisational style is something he was born with – or learned quite early.

“When I was improvising as a young bassist, I used to try and fight it off. It was always easy for me to ‘just play’ off the top of my head. I would improvise alone all the time but only used this skill when I was asked to take a solo during performances. This went on for years. I probably should have done a solo bass album in hindsight. However, in early March 1987 when I accidentally found the bamboo flute (or it found me), improvising free was just the best way to play. It’s funny that it took a different instrument to open my eyes.”

A large influence on his style, although he says he didn’t realize it until he was in his 30s, was his mother.

“I grew up in the foothills of the Adirondacks in northern New York state. When I was four, five and six years old, my mother would take me on picnic lunches into the deep woods. After we were done eating we would sit quietly, and she would always ask me, ‘What do you hear?’ My mother would not settle for the easy answers like the wind in the trees or the birds singing,” says Phippen. “She took me to places where there would be much to hear if you really listened. Once the bamboo flute came into my life, all my mother had taught about really listening opened up.”

There is something of the natural world in Phippen’s music: wind whispering through the pines, the ambient hum of nature and the myriad frequencies just in the realm of what we can hear. 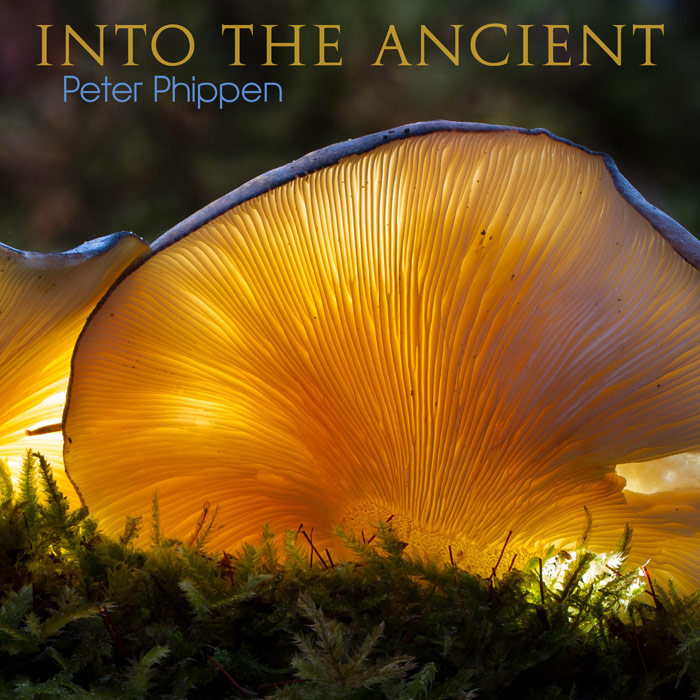 Phippen’s latest release, Into The Ancient, is available now at Projekt’s Bandcamp page, Spotify, Pandora, youTube and all other digital outlets.