Oscar Herrera returns to Black Tape For A Blue Girl

Oscar Herrera returns to Black Tape For A Blue Girl

Sixteen years after he last sang with the band, original Blacktape vocalist Oscar Herrera is back in the studio with Sam Rosenthal recording These Fleeting Moments. This is more than just a nostalgic one-song appearance — Oscar sings eight songs on the new album. Complementing Oscar is his daughter Dani who sings three songs; she was not even a year old when vocals were laid down for the band’s The Rope debut 30 years ago. Here is a video with an excerpt from one of the new tracks, “The vastness of life,” followed by the duo on Sam’s couch performing the 1989 Blacktape song “Through sky blue rooms.” Recorded in August of 2015, it’s all the more poignant because of the Bowie magazine cover playfully propped up to watch over them. Oscar and Dani return to Portland in late January to record the remaining vocals on These Fleeting Moments. Sam’s lyrics emotionally confront an awareness of time’s passage, questioning where we are in life and love. The album of all new material will be Kickstarted and then released in the spring.

Stay tuned for updates from the studio. 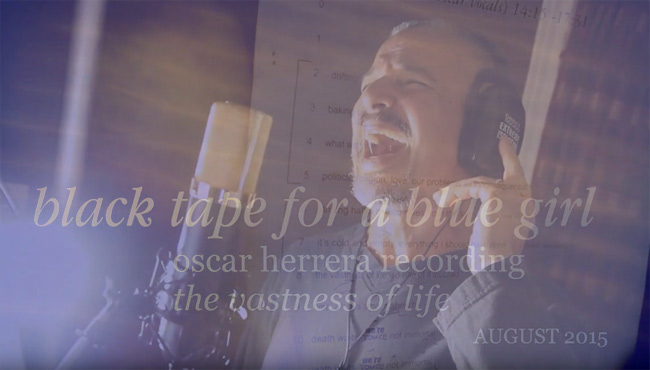 Click here for a blog with links to all the videos shot in the studio.

In:Black Tape For A Blue Girl, Blog from Sam