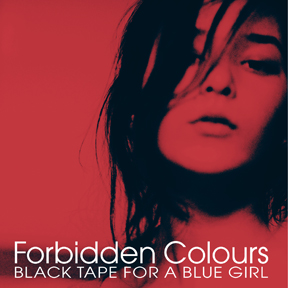 Free at Bandcamp | Last year, for the Ornamental holiday CD, I recorded a lush cover version of the theme from the 1985 David Bowie film, Merry Christmas, Mr. Lawrence (written by David Sylvian / Ryuichi Sakamoto). It’s a haunting, neo-classical track in the vein of the Remnants of a Deeper Purity album. A fan wanted a copy, so I put it up at Bandcamp, and added an unreleased early mix, as well as a track named “Forbidden” originally recorded for This Lush Garden Within, but it ended up on the First Pain to Linger book ep. The whole thing is up for a limited time as a free download!

$10 at Bandcamp | $14 CD at Projekt | Spectrum Culture listed Remnants as the #7 best Goth album of all time: Of all the albums on this list, none are more fragile or beautiful than Black Tape for a Blue Girl’s Remnants of a Deeper Purity. Fronted by Sam Rosenthal, the record is home to a host of long, challenging songs, including 26 minute centerpiece “For You Will Burn Your Wings upon the Sun.” Blending synths with Vicki Richards’ violin and Mera Roberts’ cello, Rosenthal has created something more than rock music. If ethereal had a sound, Remnants would be it. Featuring Oscar and Lucian on vocals, these nine songs are goth to the core: they are darkly beautiful, aching and melancholy. By the time album closer “I Have No More Answers” comes to an end, you feel that Rosenthal has taken you on a journey, floating you through a realm of shadowy sadness and an electronic atmosphere that stretches out forever.

$3 at Bandcamp | Black tape for a blue girl interprets the music of Dead Can Dance and Sonic Youth. Blacktape’s version of DCD’s “Fortune Presents Gifts Not According To The Book” first appeared on Projekt’s 2005 Summoning of the Muse compilation, but had never appeared as a legal digital download. Their version of Sonic Youth’s “Shadow of a Doubt” was recorded for 2002′s The Scavenger Bride album. The two additional Sonic Youth interpretations which round out this ep were recorded in the summer of 2008, for this release. They both feature Elysabeth’s passionate reworking of Kim Gordon’s lyrics.