Black Tape For A Blue Girl May Update

Hi there. Here’s an update on what’s going on with Black Tape For A Blue Girl:

As you might know, I created a Patreon page for my music. Patreon is a crowdfunding site where you can pledge monthly support. To date, 92 patrons are donating $676 to assist my creations. An anonymous donor pledged $50 a month just this week. Wow! 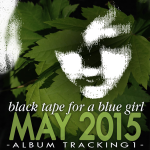 In exchange for your support you get exclusive access to my music as I’m creating it. Today, patrons are receiving my first draft of the new Black Tape For A Blue Girl album; 14 demos, a first listen to a sequence of the tracks I’m working on. Some pieces will stay, some will go. None have vocals yet. It’s work in progress; I think that’s pretty cool to hear.

If you’d like to hear it, join my Patreon with a pledge as low as $2 a month. Everyone who joins this week will get the stream, even though you haven’t been charged anything. Patreon charges your credit card once a month around the first.

MONOLITH, the electronic space-music album from my solo-project As Lonely As Dave Bowman has reached the $3000 goal at Kickstarter which means this album is going to exist! 102 people have pledged $3045 to the campaign, and there’s still two weeks to go. Things aren’t over yet; Kickstarter is now a place to pre-order your copy of this 300-piece limited edition release.

My campaign was based on an interesting question: Can I give away digital downloads of an album at the same time as I’m attempting to crowdfund the release? Will people care about my creation enough to make it happen?

And the answer is an awe-inspiring Yes you will!

I’ve received a number of emails this week that say, “It’s not just the stuff, Sam. I want to see you succeed and keep making art.” That’s pretty incredible, and feels really good.

Part of my goal with Patreon & Kickstarter is to connect to people who enjoy my work. I see new names pledging at the upper tiers; that’s fantastic! I like knowing I’m creating music that matters to you, and that perhaps one or two of my past albums have been beneficial in your life when you needed someone / something there. That makes it all seem so much more worthwhile!

At the Blacktape Bandcamp page you can download the new As Lonely As Dave Bowman MONOLITH album and also the 2007 POD album, both for free. I added my 2011 ambient/drone release The Passage, also for name-your=price.

Hopefully you’ll make a donation there, or even better, at the Kickstarter page. When you pledge at Kickstarter you get an additional 37 minutes of Dave Bowman music. Plus I get to stay in touch with you via updates on the MONOLITH project.