Hi there. An update from Black Tape For A Blue Girl:

As you might know, I have a Patreon page for my music. Patreon is a crowdfunding site where you can pledge monthly support. To date, 96 patrons are donating $683 to assist my creations.

In emails back and forth with patrons, I often see comments like, “Just wanted to say I’m here mostly to support you and the music you make, rather than the goodies, but they’re definitely a plus.” Or “I honestly support just because I want to, as a thank you for the music that I have loved for years, and as an investment in future music from you.”

It is so cool that you like what I do and want to be there for me. Thanks.

There is stuff you get in exchange for your support. At the $5 level, you get two free download albums from the band’s catalog. At $10, you also get a hand-written lyric. And all patrons have exclusive access to my music as I’m creating it.

This month, I’ve uploaded a 15 track collection of out-takes from the last year in the studio. It’s doubtful any of it will make it to the new album, but perhaps you’ll find a hidden gem that you love! (The 2nd half of this message is more information on the download).

If you’d like to hear this music, join my Patreon. Everyone who joins this week will get the June 2015 package , even though you haven’t been charged anything. Patreon charges your credit card once a month around the first.

The Kickstarter for MONOLITH (the electronic space-music album from my solo-project As Lonely As Dave Bowman) was a success; it reached 150% of the goal. It is now in production at the 3 different plants involved. The plan is to be complete in time or earlier than the July release date. There will be some additional copies available from the Projekt webstore.

The Blacktape Bandcamp page has all our albums and my side projects available. Some as low as free, few as expensive as iTunes. Give it a listen, you can stream most tracks. Or purchase something.

PS: I shot the photo on the cover of the June package this weekend. Check out more from the set here on my photo website. These are glamour / portrait shots – nothing naked on this page. But be warned that some of the links on the page goes to NOT SAFE FOR WORK images. Be careful with the clicky-click at work or if your partner doesn’t care for that kind of thing. 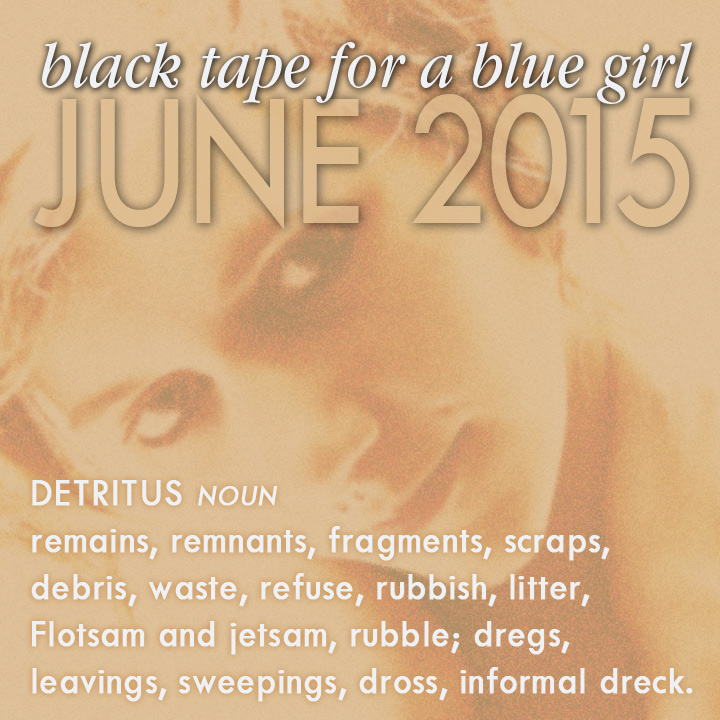 I was asking myself, “What is the most embarrassing thing for me as a songwriter and artist?” I think the answer is, “my failures.” Which is to say, all the little bits of Black tape for a blue girl music I try to create, don’t like and discard.

Honestly, the really really bad stuff never even gets recorded. I’ll play around with an idea for 30 minutes and then go, “Nope, that’s awful!” and move on to something else.

This weekend I saw Paul Barker (ex-Ministry) record a live podcast interview (at a theatre here in Portland, following a movie about the early UK industrial music scene.) Paul said something I’ve also expressed: when you’re working on music, you get really focused on what you need the piece to achieve; if it’s not up to that high level, you toss it. But sometimes you come back years later and realize it wasn’t as bad as you thought it was.

I would add that artists get overly obsessive-compulsive during this process, a bit manic or depressive (based on their personality), and we lose sight of the trees for the forest. Making art is a lot like falling in love: it’s irrational. You don’t see reality, you begin to see what you want to – and need to – see. Perhaps when there are bandmates with equal creative control, you have others to balance the obsession? Working on your own, it’s just your own irrationality & obsession to base these decisions on. Of > course, this also explains bands that break-up over “creative differences.” If four or five people all start getting obsessed on different aspects of a song, it’s no wonder songwriting teams almost always explode. How long would you put up with Lou Reed, if you were John Cale?  : )

Ok. Did I get off topic. I think I got off topic…. rewind…  >I have 15 failures for you this month. Well, ok, I’m being melodramatic, maybe they aren’t that bad… but they are all bits of deitritus from the last year in the studio. Most of this music is listenable at least once. Some of it is repetitive because it’s backing instrumental tracks that would have had more added as time went on.

And who knows? You might absolutely love one of the pieces and find your own buried treasure within these 30 minutes of remains, remnants, fragments and scraps.

I am sure Ashes fans will enjoy the first track. I was trying to see if I could figure out the sequence from “I wish you could smile.” My notes from the 80s recording were rather cryptic. But I got it.

“2014_09 Icy Drone” could have been a track for the As Lonely As Dave Bowman Monuments (addendum) release. I forgot completely that I had recorded it;  When I was compiling the bonus release, I kept thinking to myself, “Wasn’t there another song I planned to include?” Ooops!

I can’t say for sure that this stuff will never see the light of day, there’s always a possibility that something will re-spark my imagination and make it’s way onto the album. But my feeling is this all goes onto the rubbish heap of history.

Do you have a favorite?