Steve Roach / Vidna Obmana’s 1999 release was an ultra-immersive 3CD collection subtitled “Meditations For the Millennium.” With the intention of creating a place of solace for what they were sensing with the approaching year 2000 and beyond, the three and a half hour work feels especially potent and nourishing when revisited today. Available as a limited edition of 2000, it quickly sold out and remains a popular title with Roach/Obmana fans. To celebrate 20 years, Projekt makes Ascension of Shadows a name-your-price download on Bandcamp for a limited time.

“This set remain’s among our favorite work from the many collaborations we created together. Recorded in Belgium in October 1997, the music creation flowed over the course of a week, with each day building to the next. During this time in the studio, our collaborative/improvisational connection moved towards a telepathic interaction. This mode is the place we thrived. We hardly spoke words, working instinctually and speaking though sounds and music; always reaching for an expression of pure emotion that emanated from the cracks between worlds to which our ears were tuned. Twenty years later it feels like we just created this last week.” – Steve Roach – Vidna Obmana 12-10-19

A review of Ascension of Shadows from MUZE by Darren Bergstein: Some of Roach and Obmana’s most introspective and immersive recordings in years. Drones wrenched out of some nameless void cruise slowly through great vacuums of space, the only intrusion coming from stark, unearthly tones that sometimes grow, sometimes recede, into the ebony background. Using a vast array of sound and signal processors, synths and a number of acoustic noise-makers, Roach/Obmana may very well be the acknowledged masters of “anti”-ambient music, music that emerges from the shadows, often erupting out of the blackness, in your face and probing, but simultaneously willing to nestle comfortably in the darkness. These are sounds that might seem to be nearly imperceptible until they suddenly grab the surrounding environment in their awe-inspiring, immense grip. Inner space music with a definable edge. 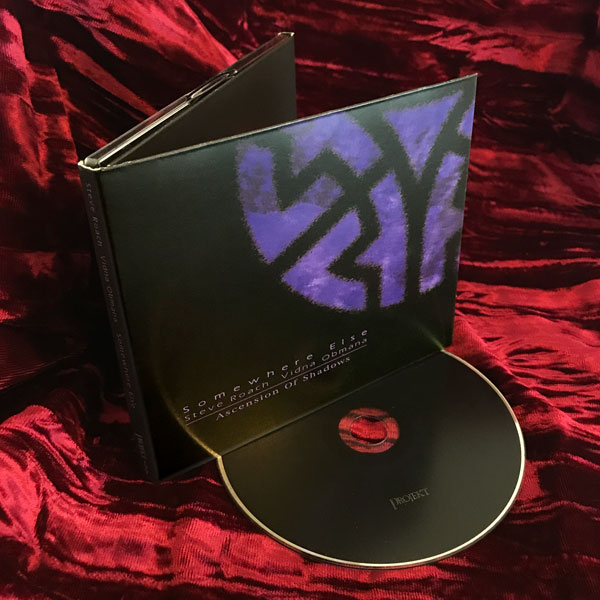 The final copies of 2005’s single-CD Somewhere Else. The 6-panel digipak contains the album-length track “Somewhere Else,” originally the first disc of the 3CD set. With your $5 purchase at our Bandcamp store you get the free download of the entire collection.