I’ve been extremely busy the last few days with musical-related work, both with BLACK TAPE FOR A BLUE GIRL and AS LONELY AS DAVE BOWMAN. In the past two days, the DAVE BOWMAN MONOLITH Kickstarter has received new CD pledges from Australia, Germany, Italy, (another) Australia, the United States, and the Netherlands. Plus a Tshirt-only backer right around the corner in Eugene, Oregon. 35 hours to go!

On Facebook, Adam wrote, “Hopin’ for a standard-edition CD, which I will cop ASAP!”

Come to think of it, I haven’t made clear that there will not be a standard-edition CD on MONOLITH. The $20 CD-in-DVD-sized digipak is as “standard” as it will get; the entire run is limited to 300 copies. Yes, there will be leftovers after the Kickstarter ends, and they will be available from Projekt’s website. But it is not an unlimited supply. 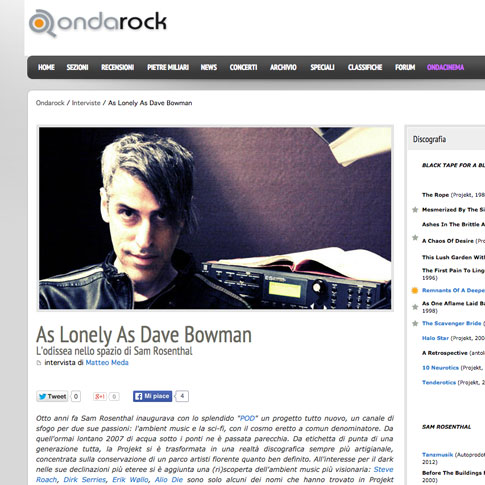 Italy’s OndaRock website posted an interview in both Italian and English. I’m really happy with the way it turned out, I discuss MONOLITH, creating music, how things have changed for artists in the last decade, and being motivated by your support. I think it’s a very honest interview that’s a great read.

(Hmmm? I don’t actually reference the year 2001 as when things started changing for artists, but that’s something I need to think about some more.)

Almost to the Star Gate

The Kickstarter campaign ends Tuesday at 9pm Portland Time. We’ve almost done it! It’s going to be exciting to see how things end up; we’re at 131% of the goal as I write this (on the verge of breaking $4000!)

If you’ve backed MONOLITH and want to add on a shirt, Kickstarter makes it easy to change your pledge. I’m not suggesting you need to change anything, I just want to be sure you know you can. On the Remnants Viinyl Kickstarter, some people learned about upgrades after the campaign ended, and I don’t want anyone to miss out.

If you don’t want to add the shirt, or get the PlexiBox, don’t do anything. You’re really wonderful for backing in the first place!

Why is Dave so lonely?

Somebody posted on Facebook that they thought AS LONELY AS DAVE BOWMAN wasn’t the best name for a musical project. Ok, well, I’m the guy with BLACK TAPE FOR A BLUE GIRL. I guess I’m accustomed to long names! 🙂

There’s a good reason why Dave is lonely.

I recently reread the novel 2001: A Space Odyssey (the last time I read it was in the mid-90s, when I lived in Chicago). Arthur C. Clarke uses “lonely” multiple times to describe Dave’s situation. And you can imagine why!

In the book, Dave’s trip is to Saturn (not Jupiter); Saturn lies between 746 million and just over a billion miles from Earth. That’s between 8 and 11 AU (AU = the approximate distance from the Earth to the Sun). And Dave is the only one left after HAL is shut off (and I’d speculate it was never completely clear whether Discovery 2 was going to be built and sent to bring him home. Seems to me the mission was to get information about the Monolith, and the crew was expendable.)

From that many million miles away, the political and personal squabbles on Earth must seem rather inconsequential. Just a bunch of bickering on a distant ball obscured by the glare of the Sun.

I’m glad I’m here on the earth with my family and friends and cat. Hey? Why didn’t they get to take a cat on Discovery 1? That would have been comforting. (The best I could find on YouTube is a cat named Misha checking out the Moon-Watcher scene). 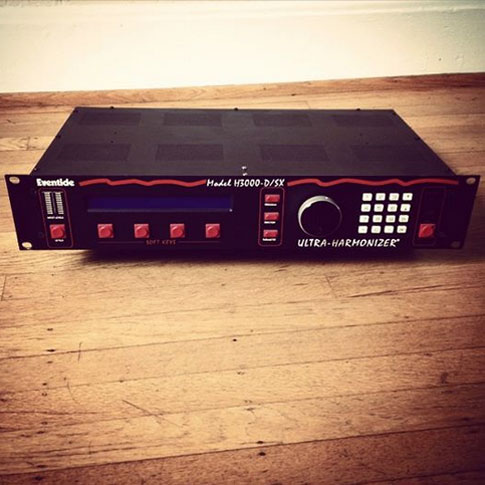 100% Failure of the H3000-D/SX unit. ‘It does seem strange, Dave. But I can
assure you there is a fault in the unit. ‘ My Eventide HS3000-D/SX was used
throughout the recording of MONOLITH, now it’s dead. Very strange.

Fortunately I have a great gear repair guy here in Portland. 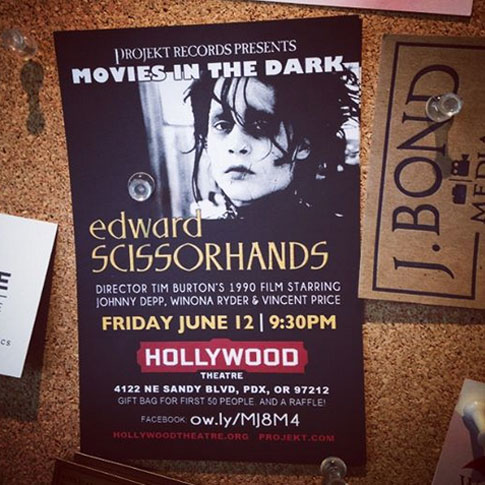 I stopped by a few coffee shops and record stores to drop off cards for my June 12th
showing of Edward Sissorhands at Portland’s Hollywood Theatre. Facebook Events Page 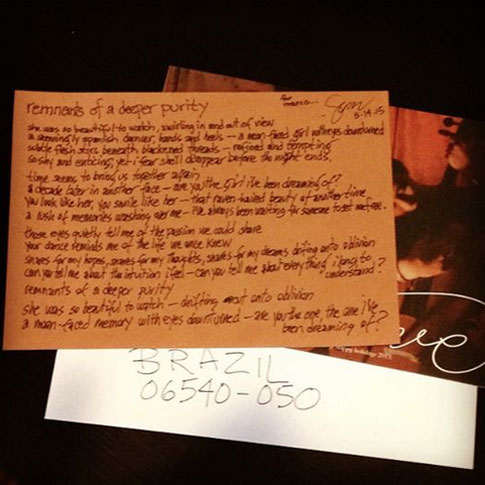 Hand-written lyrics for Marcos in Brazil. One of the benefits of being a ‪patron at my Patreon

Yes, there’s really a new album in the works!

One of the questions in Matteo’s OndaRock interview involved a bit of disbelief on whether I was working on a new album. Here’s that exchange for you:

And… what about Black Tape? I read about new stuff coming soon, but I finally missed it. And 6 years have already passed from 10 Neurotics! Are you really working on something new to be published soon?
Sam: Ha yes, of course! I just sent out a download of 14 songs to the patrons on Patreon. Every month they get music, and they got demos of new songs; none have vocals, three have viola. I don’t expect all of them will make it to the album, they’re work in progress. I have an idea for the new album, part of the concept is a double-lp (as well as a CD). It will be conceived around the idea of 4-sides (two darkAmbient and two more song-oriented). Ideally it will be out in the fall of 2015, but I don’t know if I will have the lyrics written and recorded in time for that. We’ll see what happens. But yes, I’m really working on new music.

Next Livestream Q&A Video Chat is Sun May 24

The next BLACK TAPE FOR A BLUE GIRL Patreon video chat will be open to my $10+ Patrons as well as everyone else. Why not! The more people interacting and asking questions on the Livestream, the more fun for everyone. Mark your calendar: Sunday May 24, 5pm in Portland / 8pm east coast. *I* will be on the video, you won’t appear in the video. You submit questions in the text-chat window. The video chat will be one hour long, you can drop in whenever you like.

Lucas asked, “This might be a silly question, but is the stream mobile friendly? I’m working that night, and won’t be able to get to a computer.”

Yes, I think it looks really sharp on the iPhone, actually. It’s impossible to read the text-chat in the unchangeable font size, but if you’re just listening and watching then it should be fine!” 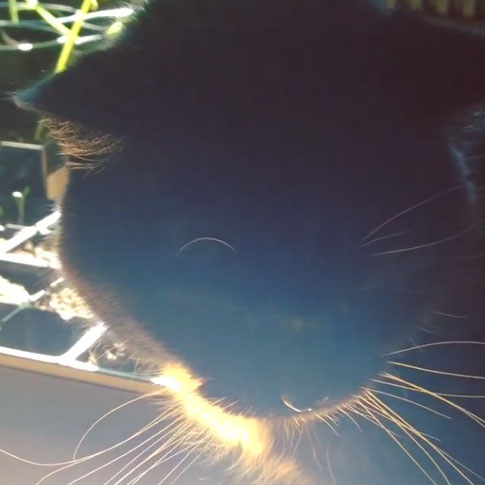 Join me on TSU

I’ve begun a profile on TSU. TSU is a new social networking site, that I’d love to see replace Facebook. The main advantage is your feed shows every post from people you’ve friended; they are not limited what you see, based on algorithms, like Facebook.

Some say, “Not a lot of people are on TSU, so what good is it?” Well, what good is having 6000+ followers on the Blacktape Facebook page, and less than 300 of you see what I post?

You can join by clicking on my page. 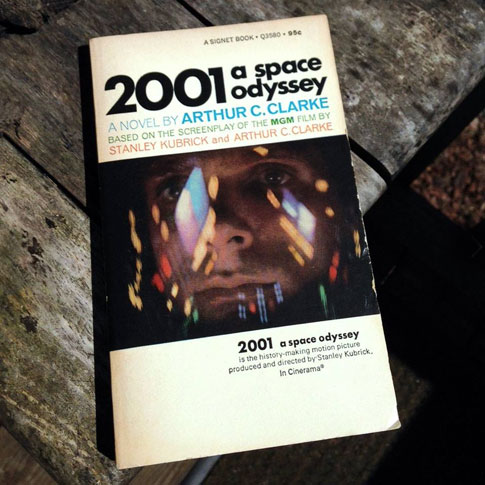 My god, it’s full of words!

The five amazing people who backed the top two tiers of my AS LONELY AS DAVE BOWMAN campaign get”The 2001: A Space Odyssey novel bought at the local Goodwill, signed on the cover by Sam.” I found the first one: a 1968 fourth printing in really great shape (looks unread, just some edgewear, and yellowed pages)! I love reading paper books, what about you?

There are just 35 hours left in the campaign; you can get yourself a limited edition CD, or one of the March of Progress T-shirts!

In:Black Tape For A Blue Girl, Blog from Sam, Uncategorized