MONOLITH: the March of Progress

I’ve added a new item to the Kickstarter for As Lonely As Dave Bowman’s MONOLITH limited edition CD.

Eight days to go. This is the point in the crowdfunding campaign when things get mellow and we wait for the rush to the end. Of course, there are new pledges coming in every day, we’re up to 114 supporters. Kickstarter is now the place to pre-order the MONOLITH limited edition CD release; there are still copies available.

A few days ago I was having breakfast with my son and a friend; we were joking about this and joking about that. I was thinking about a shirt I saw at a chess tournament my son was in. The shirt had the “march of progress” graphic on it: charting evolution from monkey to ape to man, but there was a Chess King as the finally figure.

Hardly even pausing to think, I said: “Ape, Moon-Watcher, astronaut, Star Child! Hey, I’ve never seen a shirt like that before.”

Immediately I started imagining what the shirt would look like. I came up with this: 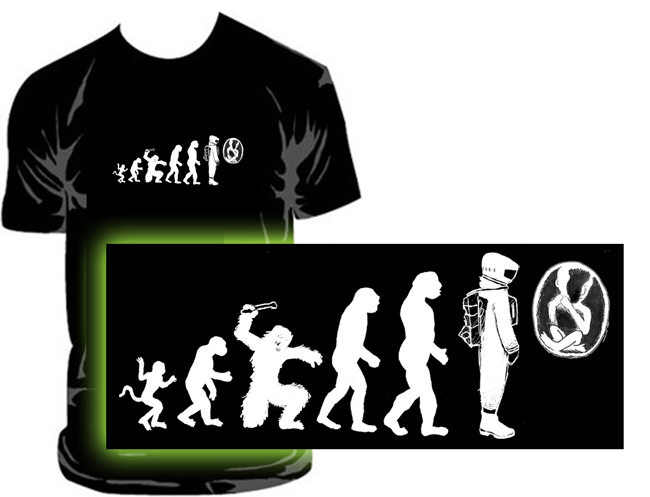 Even before we reached the $3000 funding goal (thank you for that!) I was thinking about what new item to add to the campaign. Some of you missed out on the top two tiers, yet still showed your support by over-funding the $50 plexibox. That was super nice and I want to give you a new premium to apply that pledge towards.

Kickstarter makes it easy to change your pledge if you’d like to get a shirt. Details are here on their FAQ.

The Tshirt will be included at no extra charge in the top-2 tiers.

After the Kickstarter is over, I will email to get your Tshirt size. I print on American Apparel Ts which are custom fitted shirts; these are not the massive 90s-styled T. The shirt will ship at the same time as the CDs.