The Projekt List: Sam’s thoughts. News, links, and griping about the record business.

Hi. Welcome to the Projektlist. Some of you recently joined in response to a message I sent you on Facebook… Welcome! I’ve been making this list more robust, with insight into my experience in the music business, art, and whatever else comes to mind.

In that personal message, I griped that Facebook has a new policy that is rendering the site useless for artists and labels. According to this article, “Increasingly Facebook is saying that you should assume a day will come when the organic reach (of a post) is zero.” That’s right. They don’t want you to see posts from the pages of all those artists and bands and filmmakers you friended, unless we pay to promote (and the cost is between $40 – $150 — per post!!!) That means soon you will only see ads for GM and Taco Bell. Part of the plan is to have videos that auto-play, so when you go to check your messages, you will be subjected to squawky commercials. Just like the commercials on many youtube videos.

Facebook is growing more and more useless for me; at least I have a bright future to look forward to, one without Facebook in my life.

A small number of people (ok, three!) were quite angry at me for sending a business message to their Facebook inbox. Honestly, I’ve always used my Facebook profile for business, so it didn’t occur to me that this would be a problem. I did want to share one response, because it is an interesting opposing point of view:

AP wrote: Facebook has slowly become more and more about people advertising at each other and less about human interaction between friends. I can’t wait for FB to start charging businesses to make the sorts of “advert-posts” they’ve been allowed to post for free up until now. I think that step will significantly clean up our news feeds and bring them back to the kind of human, social, friend interactions that the site used to be focused on. I think you’re a good guy and I’m interested to hear how your life is going, but I don’t really know what “Projekt” is and I hate to say it but I don’t really care. I’m connected to friends on here because I want to find out when they start and end relationships and when they get married and have kids and how their day was and what’s going on with their lives, not because I want to be a captive target audience for free advertising. I wish you all the luck with your business, but I’m not interested in being on the mailing list. Also, please don’t private message me ads for it. Thank you.

It’s nice to know that my tidy interpretation of the world is not the only version of reality. While I see Facebook’s anti-organic strategy as really horrible, others see it as incredibly positive. I am not a fan of social networking sites for “personal” reasons. I would not be on Facebook for fun, and I get annoyed with myself when I find I spent half an hour on Facebook following links and

Anyhow. It’s easy enough to unfriend me on Facebook. And if you’re sick of this email list, by all means use the “manage my subscription” tool on the bottom to unsubscribe yourself. You’re busy, I get it. I am not offended, and would rather not bother you, especially if you don’t know what Projekt is…

So somebody (on Facebook, naturally) replied in a thread, “Instead of focusing on the cool suggestions people are offering here, you… have given up on trying. So, the problem must be you. I respect your work, and the few real life conversations we’ve had were brief but good – but this attitude sucks, mister.”

This made me realize a few things. (1) People think they know you based on what you post on Facebook. I use it to promote, and gripe – one small part of who I am. I don’t post my real life on Facebook; it’s a buffer against being a public person. (2) People make their own assumptions and apply it to you. Have I given up? If I had, Projekt would have gone out of business years ago, (3) People think that posting variations on “Streaming leads to sales” and “Bands make a living going on tour” is helpful advice to somebody who has been surviving in this business for 30+ years. While these memes might be true for some artists, it is not true for most of us. I have not seen much evidence of streaming leading to sales on a significant level (I have heard individual examples of one sale now and then that results from streaming); and aside from Voltaire and Steve Roach, nobody on Projekt makes a profit on the road. There isn’t a “one size fits all” solution.

Ooooooh, wait, I got off my point. My point being….. I gripe on Facebook. It’s one of my characters over there: The guy at the record label who gripes and stands up for Artists’ rights. I guess maybe this guy missed the previous episodes of the show.

I must tell you that I am very grateful and appreciative of your support. Your love and hard-earned dollars & euros pay the bills over here. I realize that.

When I gripe about these things, it’s because many of you are interested in the inner working of the industry, and I have perspective on what it’s like. And what is it like?

So, let’s look at Spotify for a minute

Here’s a screenshot of Black Tape For A Blue Girl’s Spotify sales report for the first 6 months of the year. 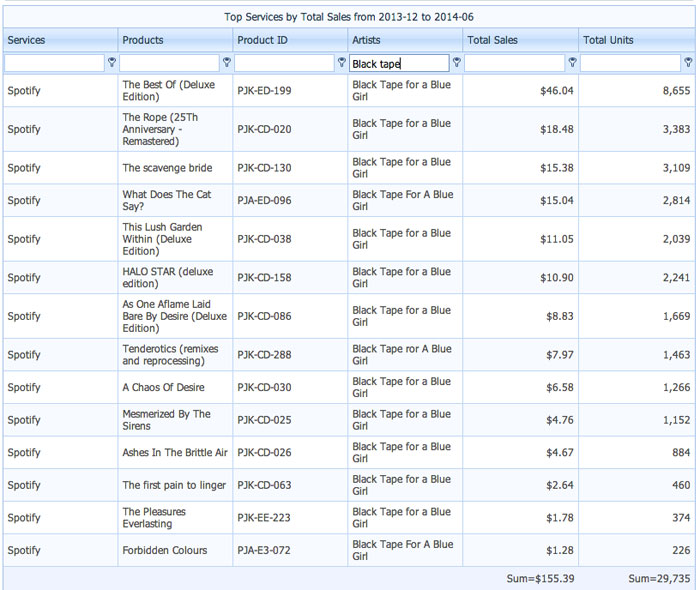 The most-streamed releases on Projekt have many more streams than this. While many albums have fewer. In fact, 65% of Projekt’s releases at Spotify had under 1000 streams per; while the best-streamed was around 92,000 (bringing in $.00446 per stream)

Now a little commercial interruption. The ranking of the top-10 sellers since we revamped the webstore just under a year ago. Steve Roach’s July release – The Delicate Forever – moved up to the #2 spot!

Whoa! There’s still a whole bunch more eList that I’ve written; but this is already pretty long, and I’m sure your coffee break ended five minutes ago. I’m going to snip the rest, and continue next week. Here’s a teaser:

I’ve changed my mind (again) about Streaming music
Even with the drop in income at Projekt, I was starting to lean towards an “Oh, why not?” attitude about tracks at streaming sites. If you can’t beat them join them. But this week, I went ape $hit and freaked! Why? Tethered Streams! I realized “streaming” is a false term (thank you Fianna Jones and Todd Loomis for this). When people subscribe to Spotify, those streamed tracks can be downloaded to the listener’s device, and carried with them when they are not online (“tethered,” as long as they pay their subscription rates). I’m an idiot, I didn’t realize that. This means streams are absolutely replacing the sales of “digital downloads,” as they serve the same purpose. SORRY, I AM NOT GOING TO HAND PEOPLE THE KNIFE TO HOLD AGAINST PROJEKT ARTIST’S THROAT. I’m taking most of Projekt’s music back down from streaming.

If you want to comment on any of this, visit my Facebook page , where there are plenty of threads about these topics.

Do you want a QR code on your headstone?
-Read the article at NPR.org

AARC Class Action Lawsuit against Ford& GM
– Read at arcroyalties Really? The problem in the music industry is the hard drive in your Ford and GM automobile? Seriously, THIS is who they think they should be suing!?

Joe Biden is the last real eccentric, and he knows it, and he plays it to the hilt because it is so much of what he is. Tattered and worn and old as it is. Joe Biden’s freak flag still flies high and proud.
– Read at Esquire.com

In Pink Floyd’s “Have A Cigar,” a record label exec says to the band, “You gotta get an album out, You owe it to the people. We’re so happy we can hardly count.” Great line! : )

I learned me at Wikipedia: The Endless River is the upcoming fifteenth studio album by British rock band Pink Floyd. Produced by David Gilmour, Martin Glover, Andy Jackson and Phil Manzanera, the album is set to be released in October 2014. Described as a “swan song” for Wright,The Endless River is mostly an instrumental album consisting primarily of ambient music. The album is based on unreleased material the band produced with Wright during sessions for The Division Bellin 1994, and was originally recorded under the tentative title The Big Spliff.

“Fifteen atmospheric pieces that straddle the boundaries of ambient and dream pop wait for you here, with soft vocals chanting beneath heavy layers of echo and effect. Sugar Wingshiver is another excellent release from this unique artist. Take this journey.”