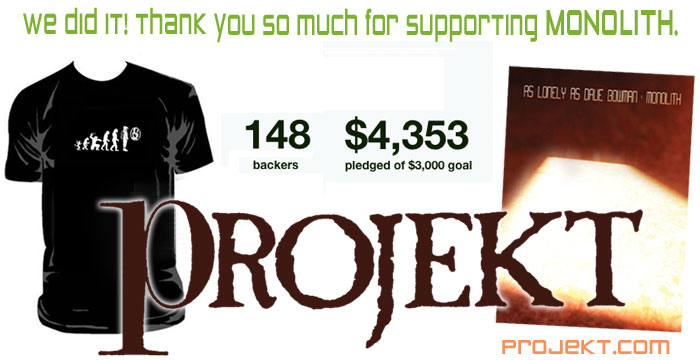 Limited edition of approximately 300 – this is the standard limited edition (CD in DVD-sized digipak). There is also an über limited plexibox edition

We made 312 copies of the CD-in-DVD-sized Digipak. 139 of these were autographed & numbered. 75 of those went inside the über-limited plexibox edition. About 25 of the run had small printing flaws and Sam pulled them aside for promo.

Unlike Sam’s work in Black Tape For A Blue Girl, Dave Bowman is full-on electronic music: droning space, wordless drift with long suspended passages. Covering Bowman’s journey to the Monolith near Jupiter, the album touches the edges of isolation and glacial solitude, with a discernible warm human core. MONOLITH’s epic expanses, asteroid flybys, serene ambient moments, vast open textures, and warmer hues of sparse remoteness are barren, yet without leaving the listener abandoned. Think of it as drone insulation rather than drone isolation.

bandcamp.com/album/monolith. It is up for just $4, for a limited time.

This album was funded by my generous supporters on Kickstarter.

Hear the Projekt Records catalog in Hi Res Master Quality at HDtracks! 20% off your download when you use code PROJEKTHD20
https://www.hdtracks.com/#/label/Projekt

Circuits' Airy Ambient for Sleep features three tracks from Steve Roach, including one from latest 2-CD "The Sky Opens"
Hear the playlist: https://soundcloud.com/soundcloud-circuits/sets/airy-ambient-for-sleep
Get the album today at Bandcamp: https://projektrecords.bandcamp.com/album/the-sky-opens